What We Are Doing is Illegal

A speech by Max Rameau 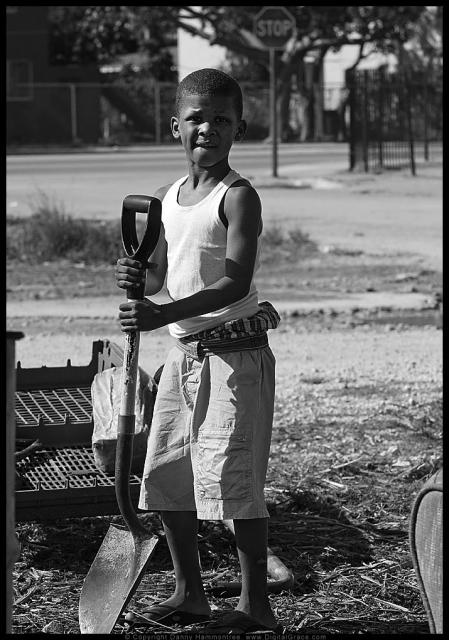 We have been doing our Take Back The Land activities in Miami since the summer of 2006. Our work began in response to the gentrification of low-income housing. We recognized that we could no longer depend on the government to solve the problems with extreme gentrification and extreme housing prices in our community because they were an integral part of the problem. So, we decided to start a new organization and focus our attention on the internal capacities of our community, rather than figure out what the government can do for us.

Take Back The Land is a collective with a leadership of about five—myself and four women. There’s a larger group of about 20 that we can call on at any time. Given the nature of what we’re doing, it’s very difficult to build a mass organization because at its core, what we are doing is illegal. We can’t have public meetings to say that we’re going to break into this house on this date. There are just too many logistical and legal repercussions. Also, we did not want to seek funding. We got one grant, which we transferred to a nonprofit partner. So, there’s no staff and no budget to speak of.

In October 2006, we took over a vacant piece of land and built the Umoja Village shanty-town in Miami, Fla. It stood for six months before falling to a suspicious fire. We felt that we had built a model but it lacked long-term viability because we had no public policy component to what we were doing. In fact, we had explicitly taken an anti-public policy stance. So, when the Miami City Manager sent one of his minions over to say, “How can we resolve this?” I said, we’re going to give you our demands. When he took out his pen, we said, “We want you to get off our property!” That was our only demand. We felt then—and until recently—that we specifically did not want to have any engagement with the government. But we did not have a public policy piece or alternative institutions in place. You can’t build the movement or create social change that way. 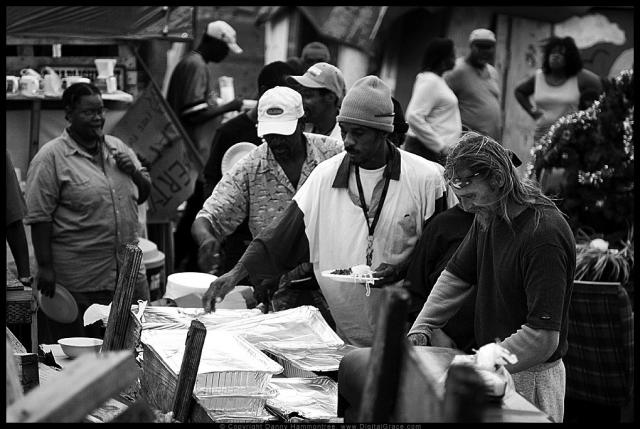 The Opportunity of Crisis
Today, because of the economic and political crisis, we are at a historic point where people are willing to rethink their relationship to the land, the economic system, and the financial system in a way that they were unwilling or unable to do before. If we had tried to do land takeovers five or six years ago, we would have been kicked out by our own neighbors. Now we get great press and community support.
Things that seemed crazy and not possible five years ago suddenly are relevant and mainstream. Consequently, this opens up an opportunity for the social justice movement to offer viable alternatives.

In broad terms, our goal is to fundamentally transform land relationships—the way people, governments, and corporations relate to land and to one another in relation to land. We believe that it’s possible in our lifetime.

If we engage in a protracted, vigorous, and broad political campaign, we can win vast public policy changes, possibly even amendments to state constitutions, which would make housing a human right. A second major goal we can pursue is to introduce new political leadership—particularly people of color, low-income people of color, and specifically, black women.

Nationwide Strategy to Take Back the Land
We are now trying to build a national Take Back The Land movement, bigger and different from the one in Miami where we were able to take advantage of specific situations and benefit from them. We want to build something flexible enough for people to apply those principles in their own communities.

The U.S. Human Rights Network is coordinating the national effort. We have signed on 10 organizations in 10 cities focused on elevating housing to the level of a human right, and at least in the initial stages, on the path of direct action: housing defense and liberations.

We think it extremely important to use direct action to challenge the prevailing paradigm around land and land relationships. Consequently, breaking the laws that support the paradigm is a critical part of our model. It’s a tactic designed to reach something bigger, which is to advance public policy initiatives that elevate housing to the level of a human right.

Our position is that progressive public policy in the United States is effectively dead because we cannot move it. And the reason for that is that we have no real leverage; meaning, we have no money to give to public officials. What we do have is our labor and this sense that we should be able to stay in the buildings, and in the homes. Since we have no viable leverage to advance progressive public policy, we have to go on a hard, direct action binge.

Ultimately, our objective is bigger social change through public policy, but I don’t think we can get to that without the direct action. But first, we need a plan. What do we do after we win? In Miami, we were unprepared to cope with victory. In fact, that happened with the home of the Trody family, which was featured in the Michael Moore film, Capitalism: A Love Story.

The bank sent the Trodys a second eviction notice a few months ago, and of course, the next day we were there, ready to take arrests, defending the family’s right to stay. One of our leaders called the bank—U.S. Bank, which got $6.6 billion in bailout funds from the federal government—and after a couple of negotiating sessions, the bank offered us the house for $1. But we had no way to accept the house. Not only did we not have an organization that could deal with victory, we weren’t even clear about what that organization or model should look like. So now, as we build the movement to the point where we have those victories, we need to concurrently build the alternative institutions that can sustain those victories.

Direct Action to Affect Banks
To bring about this kind of social transformation, we have to make it affect the economic self-interests of the financial sector and the government, which also controls large amounts of properties.

If we can occupy 10,000 of these homes, the cost of repossessing all of them will be prohibitive. At some point the banks will recognize that it is in their financial interest to just hand the places over to nonprofits. By taking the $10 billion in tax write-offs they will actually come out ahead, financially.

Our direct action has to make it so the banks have a clear financial interest in giving away the foreclosed homes rather than continuing to spend money on getting back properties they supposedly own. 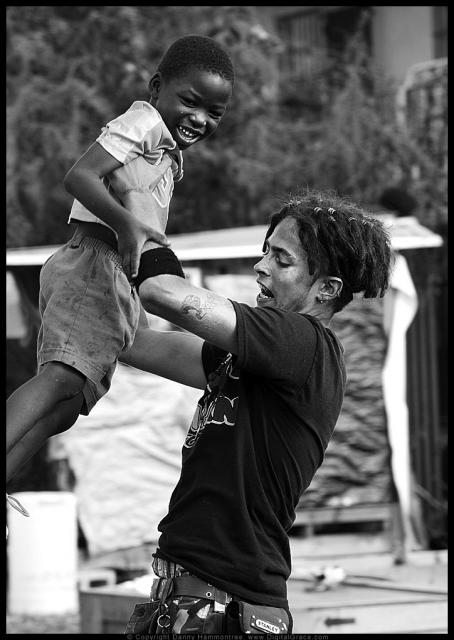 It used to be that when they put a 24-hour eviction notice on someone’s door in Miami, it meant that the police would come the next day or the day after. Now it takes the police seven to 14 business days to follow up on an eviction notice. That’s how backlogged they are.
The Trody family was evicted on a Friday, they spent the weekend in their truck, and we moved them back into the same house on Monday. Seven police cars and eight police showed up in response and stayed for about two hours, but then left without doing an eviction. That happened on February 23, 2009 and the family is still in the house.

If we can mount this kind of action even 10 percent of the time—where they will have to bring in seven police cars—it will back up the foreclosure/eviction process even more. 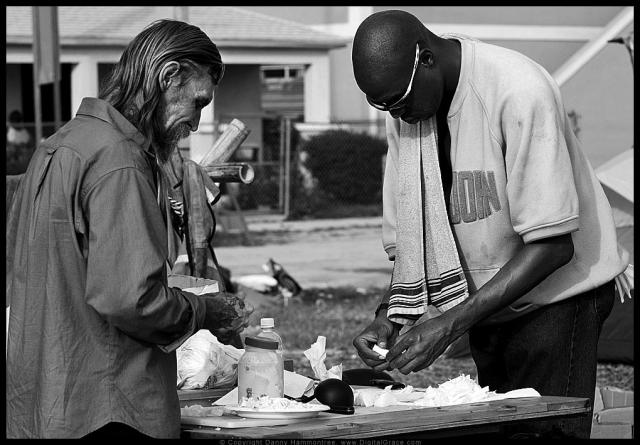 If we're able to force the police to do mass turn  arrests, or leave, the municipalities would be incapable of executing the evictions and they would fail. The municipalities and counties would then be motivated to support turning the properties over.

Our Vision for the Future
If we had a whole new world, what would it look like? We need alternative structures for control (what people normally call ownership). Land trusts and co-ops are a good base to build from. But we need to go further. If we’re going to fundamentally transform the economy as a whole so that housing is de-commodified, we will need to develop alternative financial structures, such as community-controlled credit unions.
At present, we think about land and land ownership in two ways: private and public. We would like to establish a third method of ownership where the community would have some level of control over the land without government involvement.

So, we are asking organizations to join us by amplifying the work that they are already doing and encouraging them to take it up to the next level.
In May 2010, we want to have organizations doing liberations or defenses in several areas. Our goal is to help 100 families in a nationwide campaign where we either move them into places that were previously vacant, or defend them against eviction.
If we don’t do this in a real way, by this time next year we will have missed our chance.

Max Rameau, a founding member of Take Back The Land, is a Miami-based activist working for land rights and housing. This article is based on a presentation he gave in Oakland in February 2010. Background on Umoja Village is from Take Back The Land’s website: http://takebacktheland.blogspot.com.