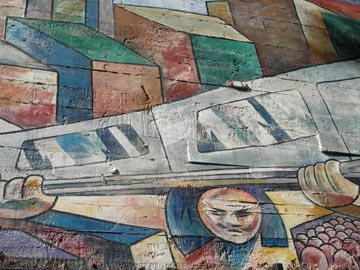 Reprinted from RP&E Vol. 12, No. 1: Moving the Movement for Transportation Justice

The Bay Area Rapid Transit system, or BART, has always lived a double life, split between its sleek public presentation and its unadvertised purpose. The ad campaigns and lobby efforts supporting the $792 million bond measure of 1962 to finance the system presented BART as a cure for traffic congestion and air pollution. The engineering reports at the time, however, plainly discussed the need for a rapid transit system not to ease traffic jams, but to protect and enhance downtown San Francisco property values and direct urban development.

Origins
In 1951, seven years before light rail lines would be removed from the Bay Bridge, BAC formed a committee to study the creation of a rapid transit system for the nine counties of the Bay Area, helping convince the state legislature to create the San Francisco Bay Area Rapid Transit Commission that same year. The BAC guided the rapid transit plan through various research and planning stages, the creation of the San Francisco Bay Area Transit District in 1957, and the 1962 bond campaign that narrowly passed, only after a successful lobby effort to count the vote over the three county area, rather than county by county, and to reduce the necessary overall vote from 66 percent to 60 percent. Aiding in BAC’s BART campaign, San Francisco’s Key System of electric streetcars was purchased by the GM-controlled National City Lines in 1946. Its conversion to bus lines culminated in 1958, when the rail lines were removed from the Bay Bridge.

BART officials denigrated West Oakland, describing it as a slum, “both to mitigate BART’s negative impacts on the community, and to argue that blacks would benefit from better links to suburban jobs, stores, and schools,” writes Joseph A. Rodriguez in his study on BART and West Oakland community groups. “Blacks, on the other hand, argued they had chosen to live in West Oakland and that BART did serious harm to the community, and that they did not want to move or be forced to commute to suburban jobs.”

Building in Profits
Of the many ways that Bechtel and its partners devised to overcharge taxpayers, the most ingenious, and egregious, is only four inches long. BART’s tracks were designed and built with a width of 5 feet. The global standard for rail track width is 4 feet, 8 inches. BART stands alone in the distance between its tracks—a fact that costs Bay Area residents untold millions of dollars.
“That was the biggest mistake,” says Allan Miller, Executive Director of the Train Rider’s Association of California. “I mean, it wasn’t even a mistake. It was done purposefully, just to raise everyone’s profits. Every time you order anything for BART, you have to not only get different parts, you have to actually build the machines to build those parts. Every machine that builds the parts has to be made from scratch. That’s an incredible expense, and they’ve plagued us forever. There is no way out of it.”

Another problem with the 5-foot width of BART’s tracks is that it is not compatible with any other rail system. This makes it impossible for BART to link with Caltrain or the San Francisco Municipal Railway. It also makes it impossible for BART to use the tracks of abandoned freight lines. This is one of the reasons BART will cost about $200 million a mile to extend to San Jose, whereas Caltrain could extend along old freight lines for about $2 million.

BART not only caters to the more wealthy suburbanites, it subsidizes their driving by providing “free” parking. Free only means that the individual driver does not have to pay to park his or her car; the cost is spread out over the entire system and hence, disproportionately over low-income area residents. BART has a total of 46,000 parking spaces. The cost to operate and maintain these parking spaces is about one dollar per day per parking spot, or $16,790,000 a year. This is an amazing subsidy for drivers, lowering the overall costs of moving further out and driving to BART.
Transportation justice activists, such as Public Advocates, have denounced the subsidies to BART as part of a pattern of racial discrimination against African Americans and Latinos. They are suing for more equitable funding, but the essential inequity of our current transportation system is built right into the infrastructure of our streets, highways, rails, and bridges by the business-first builders like Bechtel.

John Gibler is a freelance writer on environmental and social justice issues in California, and a former policy analyst at Public Citizen.
You can find his recent writing in Colorlines and Terrain.