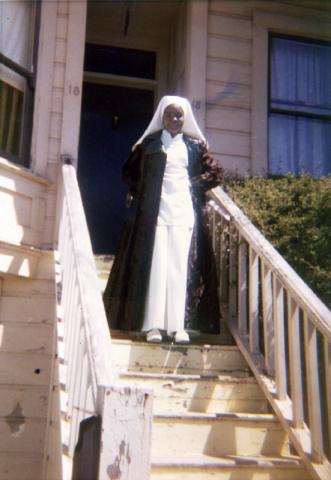 As a Junior Lieutenant, I supervised and would pat down the women and girls. I don’t ever remember finding any weapons, but when we trained, we planted weapons on each other—knife-like and gun-sized objects and other items. We were sharp and confident youth. I’d learned karate in the MGT&GCC (Muslim Girls Training & General Civilization Class—training units started by NOI founder W.D. Fard Muhammad). We also had a nursery for babies and mothers who wanted to nurse more comfortably.

I remember a family-friendly environment. We respected ourselves and each other. When I was 12, I wrote to the Hon. Elijah Muhammad in Chicago to request an X. When I got his response, the Minister welcomed me as Wanda 2X (Oliver). I was officially emancipated from the vestiges of plantation life. I might not know my ancestral family name, but “Oliver” was given back to the slave master.

I was in the first graduating class at Muhammad University No. 26 and class valedictorian at age 15. Our graduations were in February, to coincide with Savior’s Day (God’s birthday) on February 26.
After graduating, I was hired as a teacher. I wouldn’t say I was playing at teaching, but I didn’t have teacher training. In retrospect, my teaching—really as an intern—echoed post-slavery days on the plantation where one graduated, then shared what one knew. My mentor was just across the room from me, teaching pre-kindergarten. I supplemented what she demonstrated with what my mother was doing at home to teach my brother, using The Sound Way to Easy Reading. My job was a family affair. My parents supplemented my salary and helped me with purchases of flash cards, books and other teaching materials.

Phonetics, augmented with sight vocabulary, formed the basis of a curriculum that also included African and world history, mathematics and composition. Our textbooks were often the writings of the Hon. Elijah Muhammad. All I remember from my time as a student in biology is photosynthesis. The teacher used this process as a metaphor for Black consciousness: the light is Allah, Subhanahu Wa Ta’ala; the breath is spiritual life. The Messenger spoke of spiritual and physical death and how light or truth is what would awaken our people from slumber. He said we were “dead, dumb and blind to the knowledge of self.”

This Black child’s survival is directly related to the love received within the Nation of Islam. Though underprepared academically when I entered UC Berkeley, I quickly excelled because I had superior preparation in Black consciousness and knew I was capable. This self-knowledge allowed me to navigate an often hostile terrain, and later prepare my daughters for the battle inherent in this suspect space—America, a place which even today negates or denies Black greatness.

END_OF_DOCUMENT_TOKEN_TO_BE_REPLACED
The Earth Is the Only One Telling the Truth