Skyrocketing rents, multimillion dollar homes and an epidemic of evictions and displacement have become fixtures of life on the Peninsula. Widening income inequality is feeding this housing crisis: well-paid workers set the tone for the market, driving prices in an already wealthy area to astounding new heights.

But this is barely half the story. Housing availability in San Mateo County has never been determined solely by the market; decades of public policy decisions have excluded poor people and people of color. By making it almost impossible to meet housing needs, these same decisions have propelled the current crises. 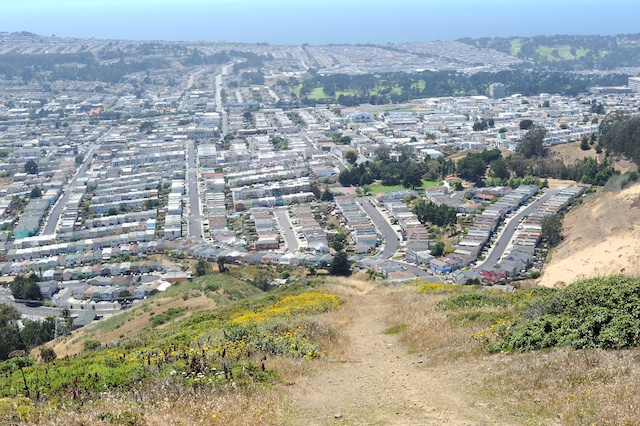 Early development in San Mateo County was shaped by segregation, as it was in many places across the U.S.1 Homeowners’ associations and individual property owners attached restrictive covenants to their land deeds—clauses that barred the sale of the property to people based on their race, ethnicity and religion. Blacks, Latinos, Asians and Jews found themselves locked out of neighborhoods around the region.The last restrictive covenant in San Mateo County wasn’t voided until 2007. Homes in the Cuesta LaHonda Guild, in the rural southwestern part of the county, had had exclusionary clauses in their deeds since 1941, even though by 2007, the neighborhood had long been desegregated.2

“For the first 16 years of its life, FHA itself actually encouraged the use of racially restrictive covenants. It not only acquiesced in their use, but in fact, contributed to perfecting them,” the U.S. Commission on Civil Rights wrote in its 1959 annual report.3 The FHA would promise developers that it would make loans to homebuyers in a new subdivision; the developers would take the promise to the bank and get low-interest construction loans. It was understood that the FHA guarantee meant that the neighborhood would be segregated.

After World War II, the agency also used low-interest home loans for veterans to maintain segregation by restricting the areas where veterans of color could use the loans.

The US Supreme Court ruled in 1948 that racial covenants couldn’t be enforced (Shelley v. Kraemer). But “…the FHA and VA continued to promote racial restrictions in their loan insurance programs until the 1960s,” wrote Richard Rothstein in The Making of Ferguson.4

After the federal Fair Housing Act passed in 1968, communities turned to planning and zoning to perpetuate segregation. While it was no longer legal to deny housing on the basis of race, cities could simply zone for large, single-family homes with spacious lawns and exclude the smaller homes and apartment buildings that low- and moderate-income people could afford.

In some cases, the policies were made specifically with racist intent. In others, residents made planning decisions that kept property values high and defended more subtly prejudiced visions of “quality of life.” This outlook persists today, as shown by debates over alleged racism at a recent neighborhood association discussion of regional planning in the generally liberal City of San Mateo.5 Whatever the motivation, the result has been the same. Little housing has been produced, and most neighborhoods have stayed wealthy and white.

San Mateo Flouts Affordable Housing Law
Housing activists in California fought to amend the state law on city planning to support fair and affordable housing. The state’s housing element law, passed in 1980, requires cities and towns to plan for their fair share of regional housing needs at all income levels. Regional councils of governments—such as the Association of Bay Area Governments (ABAG)—determine this need with a tool called the Regional Housing Needs Assessment (RHNA).

San Mateo County as a whole has consistently failed to meet its obligations to provide affordable housing. From 1988 to 2014, the county issued permits for only 34 percent of the low- and very low-income housing required.6 Several cities issued no permits at all for housing in those brackets. Menlo Park didn’t even submit the required housing action plan to the state Department of Housing and Community Development and was sued in 2012 by Public Advocates and the Public Interest Law Project on behalf of Peninsula Interfaith Action (PIA), Youth United for Community Action and Urban Habitat.

The groups brought the suit after Facebook announced its decision to move its corporate headquarters to Menlo Park. The company asked for permission to add nearly 10,000 new workers, 28 percent of them in low-wage positions. This would squeeze the already tight supply of affordable housing, and threatened to displace low-income city residents.

The lawsuit sought to stop any new commercial development until Menlo Park met its housing needs—just as an action brought by Public Advocates on behalf of a coalition in Pleasanton had done a few years earlier. Pleasanton lost when a U.S. Superior Court judge ruled in 2010 that its zoning policies violated state law.

Menlo Park opted to settle the suit, making an agreement that could lead to construction of 1,000 units of affordable housing.7

Gentrification Threatens Peninsula Communities
Excluded from wealthy suburbs by covenants, redlining and zoning, low-income people and people of color were forced to stay out of the Peninsula entirely, or crowd into a few dilapidated neighborhoods. Many found their way north to Daly City and South San Francisco, or south to East Palo Alto, Menlo Park (Belle Haven) and North Fair Oaks.

Now, as workers stream into Silicon Valley from around the world, there are few outlets for housing demand. Formerly dis-invested areas, home to most of the Peninsula’s communities of color, suddenly appear desirable. Facebook’s move to Menlo Park, for instance, has spurred a cycle of rapid speculation and displacement in East Palo Alto,8 Belle Haven9 and North Fair Oaks.

The consequences of the Peninsula’s housing policies are reverberating around the region. Families and workers who have been left out of the economic boom are crowding in with friends or relatives, living in garages or cars, or leaving Silicon Valley entirely—often spending hours on the road to commute each day from the cheaper outskirts of Alameda, Contra Costa and Solano counties.

While San Mateo cities have been happy to accept new job growth, many have effectively outsourced their housing needs to other parts of the Bay Area, fueling rising rents, gentrification, traffic congestion, and air pollution—and raising questions about the role San Mateo is willing to play in planning for the future of the Bay Area.

Marcy Rein is a contributing editor for Race, Poverty & the Environment.

3.    Richard Rothstein, “The Making of Ferguson: Public Policies at the Root of its Troubles,” Economic Policy Institute Report (2014): B16, accessed 5 October, 2015, http://www.epi.org/publication/making-ferguson/

6.    Compiled from the ABAG reports on past Regional Housing Need Allocation production, http://www.abag.ca.gov/planning/housingneeds/rhnd2.html