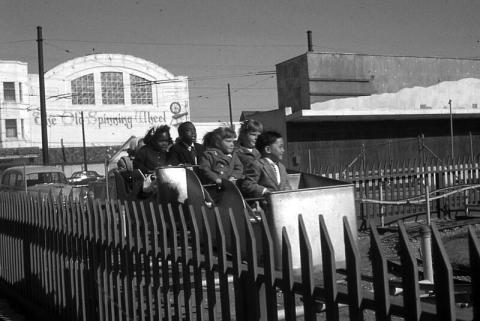 Brother was a trip. One of the highlights of our week was going to the Farmers’ Markets, working with my Mom’s list, while trying to save enough to get ice cream squares at the dairy end of the market. We could often save a few pennies because Brother bargained and fussed at the merchants who offered samples the size of fingernails. He let them know that, with his four sisters, they had to do better. Generally, we got four apples for the price of three, three plums for the price of two, and smiles because we (really Brother) knew how to bargain.

My most indelible memory is the revolutionary spirit that took the power structure to task. Brother and I often cut school to go to [Black] Panther headquarters on Fillmore Street. We weren’t central to the work. We stuffed envelopes, answered telephones, and reveled in the fact that we were present. We cut school to attend the “Free Huey” rally on May 1, 1969. We chanted, like everybody else: “Black is beautiful! Free Huey! Set our warrior free!” Months later, Huey P. Newton walked down Fillmore Street, the center of the African American community. I was all of 15 and completely committed to the movement. The first point of the Panther 10-point program was: “We want freedom, we want the power to determine our destiny.” Where are we now?

My mom, Proteone Malveaux, worked with Rev. Cecil Williams to preserve the African American presence in the Fillmore area. Urban renewal meant ‘Negro removal.’ Too many politicians ignored the validity of an African American presence in the city. It is disappointing to see African Americans pushed out of a city that we have honored and nurtured. Even in my home neighborhood, Bernal Heights, the demographic turnover is a function of the myopic indifference to our city’s diversity. There should be a commitment to diversity, a push to keep African Americans and others with lower incomes in the city whose multicultural diversity defines its energy and adventure.

Related Stories:
Racial and Gender Justice
Tweet
‹ Glimpse of the Point up Playland ›

END_OF_DOCUMENT_TOKEN_TO_BE_REPLACED
The Earth Is the Only One Telling the Truth