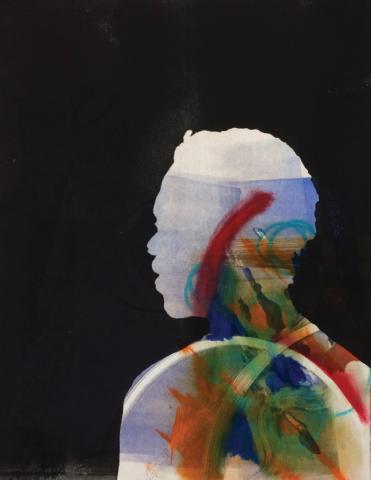 My family moved up into a Victorian flat in the Fillmore neighborhood when I was about four. My father worked and studied for college. On Sundays, my mother took us to Lighthouse Full Gospel Church. Award-winning international gospel artist Danniebelle Hall played piano and sang for the church. My aunts sang in her gospel group, the Dannie Belles when she started touring.

My world was African American. Fillmore bustled. The stores sold Black hair care products. Soul music played at relatives’ homes and in cars driving down the street. At the Black barbershop I went to with my father, the barber gave me a nickel to sweep the hair. You saw Black people in all the old pictures on the walls.
One day, when I was about six, my older cousins told my sisters and me that we were Black. We argued that we were brown. We argued outside until sunset. It wasn’t that we didn’t want to be Black, but our skin was the color brown.

Becoming Fashionably Black
Black was “cool” and fashionable. It brought Black people together. I heard that Black style “liberated” me. People wore clothes with Black statements. Store advertisements used beautiful Black models. Stylish people wore bold colorful dashikis, Afros, necklaces with Africa or Black Power fists. Sometimes, they wore all black to express their Black pride. Clothes were often revealing and men and women flaunted their beautiful brown bodies, announcing: “Black is Beautiful.” They wore large, blown-out Afros with Afro-picks sticking out. We were told to be Black and proud. People talked about Black history, arts and literature; changed their names to African names. Black power songs—“Say It Out Loud, I’m Black and I’m Proud” and “To Be Young, Gifted and Black”— spoke of Black unity.

Blacks had “soul brother” handshakes, called each other “brother” and “sister.” When they passed each other on the streets, they’d nod or say: “Hey, brother!” (Ironically, Blacks today call each other “nigga,” “dawg,” and “bitch.”)

Was I Black, African American, Afro-American, or Negro?
Other cultures fascinated me. I watched Japanese cartoons on television. When my family drove through Chinatown, I tried to understand what the Chinese characters and symbols represented. I tried to follow the Spanish spoken in the Mission. I dreamed of traveling to different countries when I grew up.

My mother took my siblings and me to visit one of her friends in the Haight-Ashbury. We passed the beatniks and hippies. These white people were definitely different from the ones on television, like Lassie, Leave It to Beaver, and Ozzie and Harriet. They dressed and talked flamboyantly; tie-dyed everything. I thought incense made them stink, but they talked a lot about peace and love.

I heard that drugs inspired their beautiful psychedelic colors and designs and their loud, noisy music. One time, while we were playing outside, a white man took some LSD and jumped out of the third floor onto the concrete sidewalk. He thought he could fly.

Then my parents bought a house in East Oakland. It was a whole different world—more homogeneous, but also more family-oriented. I thought Oakland was the country. East Oakland got hot in the summer and we played outside, barefoot. We had a large backyard with fruit trees. My aunt even bought my siblings and me some baby chicks one Easter.

Blackness was fashionable in East Oakland, too and I became more aware of Black militant activism. Perhaps the Black Movement had become more militant after Martin Luther King Jr. was assassinated. Or I noticed the politics more. The Black Panthers met around the corner and had children’s programs. The Black Muslims were very visible because they were impeccably dressed and very well mannered. They had businesses and schools that catered to African Americans. Morrie Turner’s Wee Pals was the first African American comic strip that I saw. My father bought me a book on Malcolm X but I had not knowingly experienced too much racism. African American wrestlers beat up white wrestlers on television. I felt like a part of “the struggle.”

Encountering Racism in Daly City
My father had his office in San Francisco, so the family moved back just outside San Francisco—to the foggy bedroom town of Daly City. Our house looked out at San Francisco and the ocean. Decades later, I learned that in 1962, folk singer Malvina Reynolds had written a song about our neighborhood, called “Little Boxes”:

Little boxes on the hillside
Little boxes made of ticky-tacky…
And the people in the houses
All went to the university
Where they were put in boxes
And they came out all the same...

When she wrote that song, she must have been writing about white people. Negroes or Coloreds were not allowed to live in that neighborhood until 1962.

An older relative warned me about living in a white neighborhood. Still, I was excited to move to a neighborhood like the one in Father Knows Best, The Donna Reed Show, and The Brady Bunch… only to soon find, those television shows were not reality. Daly City could be hostile. My siblings and I were in racial skirmishes from day one. We were constantly told to “Go back to Africa.” One of my teachers intentionally stoked racist comments in her class. As more African American families moved into the neighborhood, we stuck together and the bullying lessened, but it never really stopped. It could happen at any time if you weren’t paying attention—from a teacher or from other students. It made us more race-conscious and often, confrontational. We even had a couple of race riots. We formed our own little community and when we passed an unknown African American on the street or in the store, we often introduced ourselves.

Sadly, Daly City schools didn’t teach us anything about Black history and culture. There was almost no mention of slavery or the Civil Rights Movement in our American history classes. Our English teachers assigned no books written by African Americans.

Such ignorance led to negative stereotypes of African Americans. Muhammad Ali and Malcolm X were heroes who fought for my liberation, but a classmate called them “big-mouth troublemakers.” Another classmate argued that Egypt, because of its ancient history and developed civilization, could not have been in Africa. I had to show him a map. He believed Africans were just savage and primitive, like in the Tarzan movies.

I resisted the racial slights in the classrooms by either confronting them or tuning them out. In ninth grade, I complained about having to say “Nigger Jim” in Huckleberry Finn; my white English teacher angered me by saying that I should have been proud of him. To Kill a Mockingbird became just a blur of racial slurs in class. I never finished either book.

The white kids had a false sense of racial superiority, but they didn’t live up to the ideals shown on television. They knew it, and I reminded them often.

Staying Connected to the Black Movement
There were African American kids who tried desperately to fit in with the white kids. We called them “Uncle Toms” and “Oreo Cookies.” They seemed to be ashamed of their blackness and would not talk to the other African American students. They pretended to be entertained by racist jokes and comments. One boy had thick, nappy hair. He let it grow long, like the white boys and like them, carried a hairbrush in his back pocket. He tried to brush his hair to the side but it would look disheveled. He never said he was Black, instead, said he was “half-Indian.” Another dark-skinned girl wore the same makeup that her white friends wore. The color didn’t blend with her dark skin and looked stark and costume-like.

But most African American high school students stayed connected to Black San Francisco. I listened to the Black radio stations—KDIA, KSOL and KBLX. Each station had a different style, but they put out positive messages of Blacks and connected me to the Black communities in the Bay Area.

My siblings and I stayed connected to a larger proud Black America through magazines like Ebony, Jet, Black Star, and Soul Beat. I watched Soul Train every Saturday morning, and every Black movie and television show that I could. (I had little to talk about at school with my white classmates.)

Some of us became “Super Black.” Looking back, I think we were just being normal teenagers, trying to find ourselves, but too often, looking at the stereotypes we learned in school. “Super Black” was just a “blacklash.” African American students who spoke properly were teased for “talkin’ white;” those who took college prep classes were teased for “actin’ white.” Several times, African American boys teased me for going to the library or carrying books “like a white boy.” It was as if African Americans were only supposed to play sports, sing or dance.

I had fun competing in those college prep classes, but success didn’t shelter me from the stereotypes about African Americans. My white classmates just made excuses, like “You’re smart for a Black guy.” One time, a Chinese student said, “I’ve never met a Black guy smarter than me before.”

I expressed my Black militancy through academics. I had my solid foundation in Black culture and Black pride to fall back on. I understood Malcolm X’s militancy. The Black Power struggle became my own. But the Black Power movement was often anti-capitalist. Looking back, I really wish I had studied money and economics.

END_OF_DOCUMENT_TOKEN_TO_BE_REPLACED
The Earth Is the Only One Telling the Truth