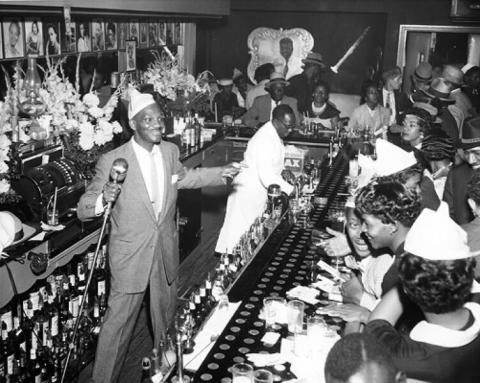 Richard Berry was happy I liked his music so we started a fan club chapter. James Brown asked my opinion on how a suit looked before he had it tailored. Bobby “Blue” Bland tried to get on my good side. He wanted to marry my mother. I was the unofficial critic of new songs for many groups. Jackie Wilson and Little Richard were not so friendly to me but Earl Grant would play at mother’s friends’ parties.

From the time I was eight, until I was 18, I visited the Booker T. often while my mother, Sadie Williams, was working. She started as a desk clerk. Maya Angelou’s mother, Vivian Baxter, was also a clerk and they became good friends. Later, when I was in high school, my mother became the manager. To occupy my time, I gave out room keys and became a PBX operator. PBX was a telephone system with a switchboard—an electromagnetic device that required the operator to plug telephone lines into their destination wires by hand.

The cocktail lounge was called the Emperor and the dining room—which accommodated club events, parties and banquets—the Empress. Sam Mines was the cook. The soul food there was awesome. Mr. Mines’ menu included dishes like ox tails and red beans and rice, because he wanted people to come off the street and get home-style cooking. A woman named Marie Alexander was head of housekeeping, but only men were allowed to use the vacuum cleaner.

The hotel had six floors and 125 rooms, with suites in the front of the top floor. There were free radios in every room and television sets in each suite. Chartreuse drapes laced the windows and maroon carpets embellished with silver scrollwork covered the floors. Mirrors decorated in peach and silver lined the serving counter.
The hotel’s last owner, Willie Lee Young owned a rooming house before he bought the Booker. Mr. Young leased the cocktail lounge to Charles Sullivan, who pulled in standing-room-only crowds every night with live music. Mr. Sullivan also booked some of the biggest Black entertainers at the Fillmore (the Harlem of the West): James Brown, Bobby “Blue” Bland, Jackie Wilson, Little Richard, The Coasters. I saw opera star Marian Anderson, singer-dancer Josephine Baker, and singer-actor Paul Robeson in concert.

In 1952, San Francisco Mayor Elmer Robinson said it would be “a desecration and an insult” for Paul Robeson to perform at the San Francisco Opera House because of Robeson’s support for Communist ideology, so the great bass-baritone was barred from that venue. In response, Robeson held a press conference with the San Francisco Chronicle at the Booker T. Washington Hotel. He called Robinson “one of the principal fascists of the West Coast.”

It wasn’t just musicians who patronized the Booker T. Washington. Legendary San Francisco Giants’ homerun hitter Willie “Stretch” McCovey and boxer Archie Moore stayed there; also civil rights activist W. E. B. DuBois, the tap-dancing Step Brothers, and the Harlem Globetrotters. In 1960, the Ugandan ambassador to the United Nations changed from another hotel to the Booker T. Washington because, he said, “I wanted to see how my people live in your country.”

If you go to that once-famous area now, you will find shopkeepers from Italy, Australia and New Zealand. You’ll find eleven-dollar flip-flops and food from the Mediterranean. There is a Safeway store in its location now. It crosses two streets, but it uses a Webster Street address. Only a street sign indicates the possibility of the hotel’s address, which was 1540 Ellis Street.

My brother, many years later, was in BB King’s company and BB remembered [the hotel] well. When the San Francisco Redevelopment Agency stepped in, no community support mobilized, and this landmark hotel vanished. The city assessor’s office says the hotel’s address never existed. But living entertainers know, the former employees and their families know, and the folks at Marcus Books in San Francisco and Fillmore know about the hotel.

This is an excerpt from The Baobab Tree: Journal of African American Genealogical Society of Northern California, Inc., Fall 2011, and has been revised for Race, Poverty  & the Environment.

Related Stories:
Racial and Gender Justice
Tweet
‹ Muhammad University No. 26 up Glimpse of the Point ›

END_OF_DOCUMENT_TOKEN_TO_BE_REPLACED
The Earth Is the Only One Telling the Truth