After six months of organizing, the workers at Loop Transportation who drive the Facebook shuttles, voted to join Teamsters Local 853 in November 2014—cracking high-tech’s anti-union wall and inspiring a wave of union organizing that lifted up wages throughout their industry. 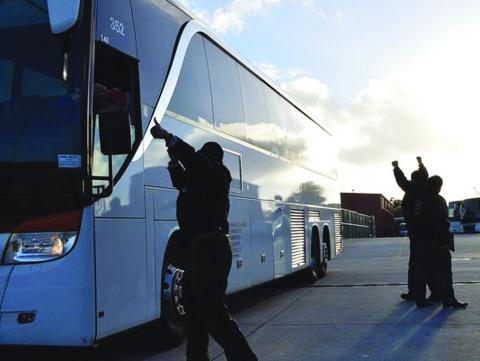 “Everywhere we turn, people seem to be talking about income inequality, especially here in  Silicon Valley,” says Teamsters Joint Council 7 President Rome Aloise. “But if you look at recent US history, you’ll see that the income gap has grown as the percentage of unionized workers started to shrink—so we see this organizing as a hopeful move towards closing the income gap in Silicon Valley.”

At their peak in the 1950s, the Teamsters represented almost 50,000 mostly Latino cannery workers in San Jose.  These good middle-class jobs with decent wages and benefits are all gone now, replaced with low-wage service sector employment.  The canneries were shut, the orchards paved over, and highly successful companies such as Apple, Google, Facebook, eBay and others grew up in their place.

While these new companies have made some fabulously rich in this new information economy, most people haven’t got much to show for it. Low wages, rising rents, and high housing prices are squeezing working families out of the Bay Area. Although the region’s top tech firms made a record $103 billion in profits in 2013, one in three Silicon Valley households do not make enough money to meet their most basic needs.

The business model of the high tech industry itself exacerbates the problem. Median wages for tech workers employed by these companies exceed $60 per hour, according to data from the California Employment Development Department. But the high tech firms also contract out a vast array of service jobs, such as security guards, janitors, cafeteria workers, and shuttle bus drivers.  For these workers, who are primarily people of color, median wages range from $11–14 per hour.1

When the Loop Transportation drivers decided to organize with Teamsters Local 853, their number one issue was working split shifts. They only got paid while they were driving, not during the downtime between the morning and evening commutes. They were working twelve to fourteen hours for eight hours’ pay. Since most couldn’t afford to live in the Bay Area, they couldn’t get home between shifts. They were left with nowhere to go; sometimes they slept in their cars.

“Driving a shuttle bus means long days,” says Loop Transportation driver Sean Hinman. “Before we had the union, it meant hours of sitting in Bay Area traffic and hours of sitting around between shifts without pay.”

Loop not only required split shifts, but provided no vacation, paid holidays, or retirement benefits, and offered healthcare that workers simply couldn’t afford. So, despite the company’s anti-union campaign, the 87 drivers prevailed in their National Labor Relations Board election.2 This was outstanding, given high tech’s longstanding hostility to unions. And in February 2015, the workers negotiated a first contract that provides for a $9 per hour wage increase, on average (from $18 to $27.50 per hour), fully paid family healthcare, up to five weeks paid vacation, eleven paid holidays, bereavement leave, a pension, and more.  Facebook signed off on it.

Usually it takes a long, contentious campaign for unions to win a first contract.3 This was a dramatic exception. The high tech companies have deep enough pockets to foot the cost of a union contract with no difficulty—and could pay a political price in the Bay Area for being perceived as anti-union.

Union Drive Lifts Wages Industry-wide
Just after the Loop Transportation workers voted on their contract, more than 150 drivers for Compass Transportation—which runs the shuttles for Apple, Yahoo, eBay, and other companies—won their union election. They prevailed after four months of organizing amidst an anti-union campaign. They negotiated a similar contract that is still awaiting approval by Apple and Yahoo.  In the meantime, hundreds more workers for roughly a dozen shuttle companies are on the move.

Although it involved a relatively small number of workers, this organizing set off a chain reaction that nobody anticipated. After the victories at Loop and Compass, last March, Apple and Google announced across-the-board 25 percent wage increases for all shuttle bus drivers—union and non-union alike. The companies were responding to collective pressure from both the Facebook victory and Silicon Valley Rising, especially the successful effort by the Service Employees International Union/United Service Workers West to push Apple and Google to bring their security officers in-house.

These wage increases appear to have forced non-union shuttle bus companies to follow suit just to keep their drivers from going to one of the better-paying companies.  One employer estimated that wages have gone up 30 percent in the market since the organizing started.

The ripple effects of the tech drivers’ successes have spread beyond Silicon Valley.  The same companies that service high-tech firms also service airports, transit agencies, and other clients in the Bay Area.  For example, Teamsters Locals 665 and 853 represented Loop drivers at San Francisco and Oakland airports before the Facebook group organized.  All of a sudden, those clients find themselves in a position where they need to raise wages and benefits just to keep their drivers.

At the San Francisco Municipal Transportation Agency (SFMTA), Local 853 represents about 145 paratransit drivers.  Many of these drivers are African American and live in Bayview/Hunter’s Point.  They transport San Francisco’s disabled, elderly and infirm under a contract SFMTA has with TransDev—the parent company for Compass Transportation.  Local 853 started bargaining with TransDev in November 2014, and by April 2015 had only secured a proposal for 1 percent wage increases.

Meetings with Mayor Ed Lee, several members of the Board of Supervisors, and the SFMTA staff produced some movement.  Angry members, led by some very strong shop stewards, were threatening a strike as a last resort.  Nobody wanted to leave the riders stranded, but with median rents in San Francisco hitting $4,225 per month, something had to be done.

With active members pushing the issues and strong help from political allies, in May things broke.  Little more than a month after Apple and Google announced pay raises to try to keep pace with Facebook, TransDev suddenly seemed to discover some new reserve of funds. The company offered up an $8 raise over the five-year contract, which amounted to a whopping 44 percent increase. They upped the paid days off from 12 to 25 and included five paid holidays, where drivers had none before.

“Despite these very positive gains, we understand that wage and benefit increases alone will not solve the problem—so many factors increase inequality in the Bay Area,” Rome Aloise says. “That’s why we’re working with Silicon Valley Rising to address issues like the high cost of housing and the need for better transit.”

Doug Bloch is the political director for Teamsters Joint Council 7, and participates in the Transportation Justice Alliance.

2.    The National Labor Relations Board (NLRB) is the federal agency that oversees the elections in which workers vote on whether or not to join a union, and the bargaining between workers and employers over contracts. Workers face serious obstacles to winning union elections. Employers routinely fire union supporters and threaten to cut wages and benefits or close the plant if the workers vote union; they spy on organizing efforts and interrogate workers in one-on-one meetings with supervisors. See Kate Bronfenbrenner, No Holds Barred: The Intensification of Employer Opposition to Union Organizing, Economic Policy Institute and American Rights At Work, 2009, p.2. accessed October 17, 2015, http://s3.epi.org/files/page/-/pdf/bp235.pdf

3.    Fifty-two percent of workers who win union elections still have no contract a year after the election; 37 percent don’t have an agreement two years out. Ibid, p. 3.