Exodus From The Jungle

In the heart of Silicon Valley, the tech capital of the world, resided one of the largest homeless encampments in the United States, The Jungle. The encampment was the epicenter of homelessness in the Valley and was home to nearly 400 residents. The Jungle lay hidden in a creek bed off of Story Road in East San Jose, a stark contrast to a family amusement park across the street. After decades of existence, in the midst of a housing crisis in Silicon Valley, the City of San Jose decided to close The Jungle. Silicon Valley De-Bug, a media and advocacy organization, created a video documentary, Exodus from The Jungle, that depicts the eviction, talks with residents of The Jungle about what the camp meant to them, and follows their efforts to find new places to stay.

"Exodus From The Jungle" is a Silicon Valley De-Bug Production

All kinds of people stayed at The Jungle. “There’s a common misconception to how people become homeless,” said Robert Aguirre, an advocate for the homeless and former resident of The Jungle. “The stereotypical view is that homeless are drug-crazed, violent and lazy people. That they choose to be homeless and expect society to provide for them and aren’t interested in helping themselves, choosing instead, to live in filth and garbage, hoarding useless junk and using stolen shopping carts to haul it all around town. I am living proof that this is not so. I used to own my own business here in Silicon Valley, making $200,000 a year. I provided consulting services to manufacturers of electronic devices, designed and manufactured here. Many of the companies decided it was cheaper to manufacture their products outside the country. 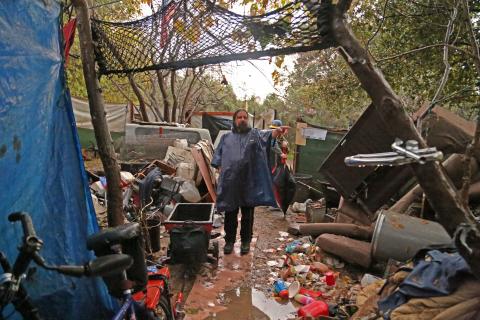 “What a lot of people don’t consider is that they’re one or two paychecks away from being homeless themselves, with the price of housing in the Valley being what it is. You look around here and you see a lot of people who lost their homes due to foreclosure. They’ve lost their jobs because of illnesses, or because, like in my case, everything’s moved away,” Aguirre said.

The Jungle was home to all of its residents. People had built their own structures that they called home. It was an underground city. Despite the portrait often painted of the encampment, most residents vouched for how close a community it was. Anna, a former resident, called The Jungle a “family” and said, when the city dismantled The Jungle they were “tearing apart [their] family.” The city was said to be under pressure from the Environmental Protection Agency regarding the pollutants in the creek, but residents attested that the mercury and other pollutants existed before they arrived. The day they were evicted, residents helped each other gather all belongings they had as they set off to find a new place to rest.

The night before the eviction, we heard there was going to be a press conference and protest. Organizers who had been aiding the community at The Jungle heard that the city wouldn’t start the sweep until a few days after the rain. It had been pouring leading up to that Thursday, December 3, 2014. It was dark and wet, but the sky was clear. Everything was very still; San Jose hadn’t woken up yet.  We showed up at The Jungle at 6 a.m. The cops were already there. Story Road was coned off from around the bridge to the end of The Jungle.

A temporary police fence stretched close to a quarter mile along the sidewalk that separated The Jungle from Story Road. As residents climbed out of The Jungle, they put their belongings on the sidewalk. By 7 a.m., the sun was rising over the hills in the east and the sidewalk was literally lined with people’s lives. Everything people owned was inside bags and shopping carts. Some stood not knowing where to go—there was nowhere for people to go.

Community organizers circled across the street planning immediate next steps. The police weren’t letting anyone cross the fence into The Jungle, but some residents and organizers were able to convince police to let us in. Photographer Charisse Domingo and I were allowed in and went to the edge of the top lot. While we interviewed former resident Anthony King, who’s now a community organizer, an elderly woman was gathering her belongings nearby. We cut the interview short and helped the woman move her belongings to the sidewalk across the mud. Her name was Eva. She had a fractured hip and was afraid of falling. Charisse took her shopping cart and Eva grabbed my arm as we slowly walked across the muddy lot. 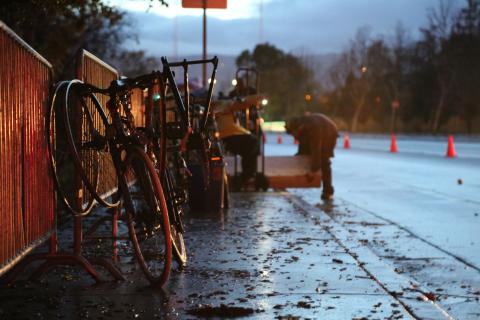 What looked like a hundred city cleaners showed up and started destroying the camp, moving fast, tearing down tents and throwing away people’s belongings. Eva and I moved slow, being careful so she didn’t get hurt. When we got to the sidewalk, maybe 100 feet from her tent, she asked me to get her friend’s bicycle. They were separated during the frantic morning but she didn’t want her friend’s bike to be taken: an act of love. While standing on the sidewalk, Eva looked back and watched the workers destroy her home. She had lived there for almost a year. She turned to me and said, “There goes my home.” She said it with a strength that had endured this pain before. She walked to the bus stop to sit down because she couldn’t stand any longer.

“I’ve been homeless for seven years,” said Yolanda, a homeless advocate and former Jungle resident. “I have three kids who live with my parents in Mexico. I hope my kids never have to deal with this in their life. What they did here... they want to turn it into a dog park. What are they trying to say with that? They have better feelings for dogs than for human beings.”

After the eviction, some of the former Jungle residents tried to reestablish their community in two other locations, but the City swept them out each time, scattering them around the county.

“When The Jungle was closed, it drove a lot of homeless people all over the county to make themselves less visible, thereby lessening the chances of being harassed,” said Anthony King. “In doing this, many fell off the radar.”

Andrew Bigelow is a Hip Hop artist as well as a writer and organizer with Silicon Valley De-Bug. Follow him on social media @HeIsAndrewBigs.

The video documentary “Exodus From The Jungle” is available online at https://www.youtube.com/watch?v=jazNJRXvaWI