“Last night I got off work at 1:30 a.m. and missed the last light rail,” says Lucila (Lucy) Moran. “A girlfriend who works nearby got a taxi with me, but it cost us $15. The bus 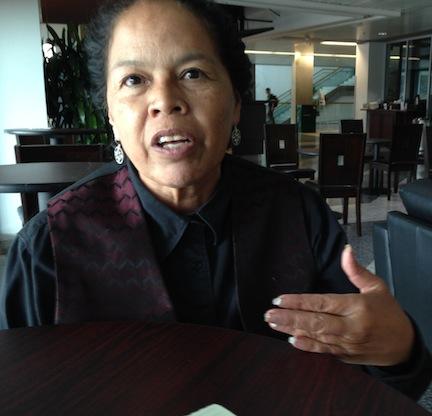 That’s just one of many improvements this  would like to see to make the bus system work better for those who need it most.

Moran grew up in San Jose. “I can still remember the orchards, how beautiful they were. In the summers, my family all worked picking fruit—cherries, walnuts, pears, and prunes. My brother said to me, ‘If you don’t study and go to college, you’ll be doing this the rest of your life,’” she says. She paid attention, following her brother to San Jose City College, then to San Jose State, where she majored in dance.

She still wears her dark curly hair in a dancer’s bun, and when she’s telling me how one of her teachers insisted on precision in every move, she lifts her spine and raises her arms in an elegant line; I can see her on stage. But a car wreck changed her plans.

“I couldn’t move from the neck down,” she says. “I told God that if He healed me, I would give up theater, and only dance for Him.” She recovered, and went back to school. Then she got married and had three children (the oldest over 30 now), but ended up a single mom after her husband left the family.

“I was taking the bus all over, sometimes with all three kids,” Moran recalls. She encountered her share of frustrations with bad connections, infrequent service, and rude drivers. “And bus stops need benches and shelters for seniors and people traveling with young children,” she says, remembering a day when she and her grandniece got drenched by a sudden rainstorm while waiting for a bus. Even telling this story, she smiles a bit.

Over the course of several years, Moran finished her BA in theater arts and drama and got a second degree in creative arts and dance. She’s had a variety of jobs and taught dance in the community and at her church. Today, she works as a substitute teacher and as a banquet server through UNITE-HERE Local 19. Sometimes she has a car that works, but sometimes she still relies on the bus and light rail.

To get to her sister’s retirement home across town, Moran has to take three buses and light rail, shelling out $2 for each leg of the trip. “Six dollars is a lot of money when you’re struggling,” she says. The trip takes two hours if all the connections work, longer if they don’t.

A friend told Moran about the Transportation Assistance Program (TAP) at Sacred Heart. She had to make three early morning trips to get her discount pass but she appreciated it so much that she was glad to help when the organizer at Sacred Heart asked her to bring more people together to save the program.

“Before I got involved, I used to just get upset,” Moran says, leaning towards me, her hands dancing as she talks. She had no idea how decisions about transit got made, or how to work for better service.

“Lots of people don’t know they have a voice, like I didn’t know.” Now she helps with RUTU’s meetings and transit rider surveys and tries to motivate others to get involved.

“I tell them, ‘If you love the [TAP] program, help others. Speak up so the people who make decisions will know there’s a need out there, and keep the program going,’” Moran says. “It’s hard when people have to juggle kids and work, they’re stressed, but I tell them, ‘If you can’t come, tell others,’ so everyone has a way to contribute. And I ask, ‘If not us, then who?’ If you get involved, we can make it happen.”