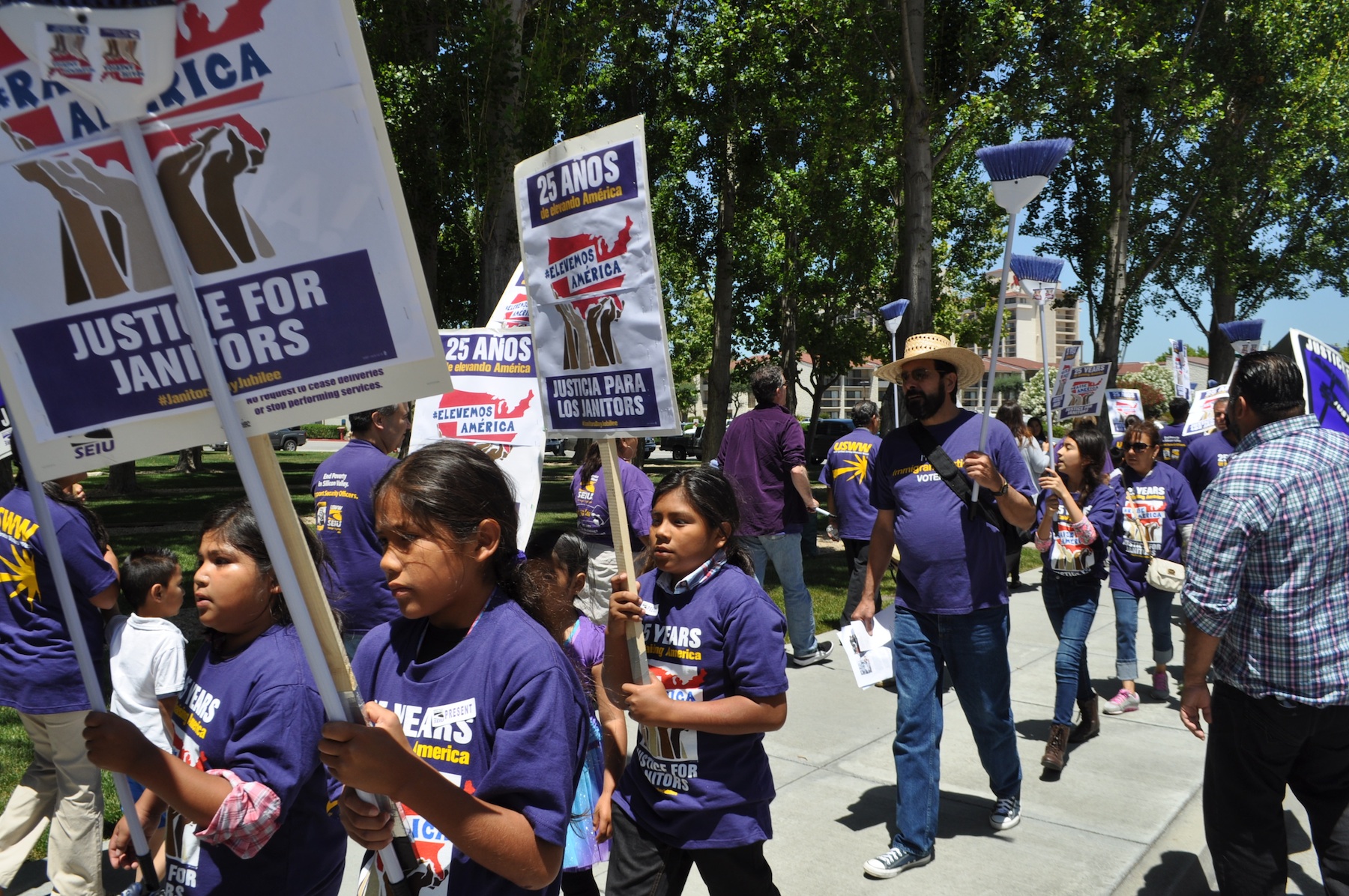 Over the next few years, the high-tech sector, Silicon Valley’s economic engine, is expected to continue its rapid growth, bringing with it a high demand for service sector jobs. In fact, more than half the Bay Area’s job growth will come from occupations earning less than $50,000 annually.1 Silicon Valley’s workforce continues to stratify, with one large group of wealthy workers, one large group of low-wage workers, and a few workers in the middle. And in a blisteringly hot housing market, low-wage workers—a disproportionate number of whom are Latino—face some unique challenges and constraints around living and commuting to their jobs.2

Hoping to illuminate the housing and transportation concerns of a rapidly expanding low-wage workforce, we surveyed more than 230 janitors at Silicon Valley’s high-tech firms. The study found that currently, many of the janitors live relatively close to their workplaces and feel that their only option is to commute alone by car. However, this situation is not sustainable—either for the janitors, as they struggle to live on only $25,000 annually, or for the Bay Area, as it strives for a future that is more environmentally sound. As one janitor put it, “How am I going to pay my bills? I’m going to pay the rent and I’m not going to eat!”

Although the opinions expressed in this article are entirely the author’s, the research was sponsored by a grant from the HUD Sustainable Communities Initiative to the Metropolitan Transportation Commission, and was carried out by the Equity Collaborative, in collaboration with Service Employees International Union-United Service Workers West (SEIU-USWW), which represents 1,200 janitors in high-tech companies across Silicon Valley, including Facebook, Google, Yahoo, Apple, Microsoft, and Genentech.

We hope this study will help catalyze some beneficial shifts towards a more equitable housing and transportation policy.

Commuting
Our study began with a common hypothesis: As the Bay Area grows increasingly expensive, low-wage workers will be forced to move to less expensive real estate and commute long distances to work. However, researchers found this not to be the case.  Almost all the janitors (95 percent) live in Silicon Valley (60 percent in San Jose), and work an average of 12 miles away. The median commute time each way is 30 minutes, not drastically different from the commute times for residents at other income levels.3

The vast majority of janitors (85 percent) drive their own car to work, 13 percent commute as passengers, and only 4 percent report not using a car (as driver or passenger) for any part of their regular commute.4 A very small number report using public transportation or walking, though they may sometimes use a car as well.

The expense of gas greatly limits how often those surveyed leave the house. One explained, “When I go out to get gas, I think about everything I need and I buy everything that same morning to not have to go out again.” Despite the cost, the janitors cite several reasons why they consider a car “a necessity” for working:

The transit system fails workers who commute outside of normal commute hours. “My schedule and the bus service schedule don’t match. I leave at 4:30 a.m.,” one janitor explained. Only 20 percent of the janitors both start and end work during regularly scheduled public transit hours.

There are no transit stops convenient to the workers’ homes and/or worksites.  Corporate campuses in Silicon Valley generally follow mid-century sprawling land-use patterns and are built on large, relatively inexpensive lots, removed from existing transit lines.

Many janitors have to move between buildings at their worksite during a shift, which can be difficult without a car as the distance between buildings can be over a mile. It can also feel unsafe for those working at night. The janitors also said that they are not allowed to use the bike shares many campuses offer the higher-wage employees.

Driving a car is often faster. Although many reported uncertain commute times, our survey found that commuting by public transportation can be twice as slow as commuting by car.

Without substantial efforts to increase the availability of public transportation, cars are a crucial link to economic opportunity for the janitorial workforce. In Silicon Valley, the landscape of public transportation investment mirrors the income disparity. Far more money—most of it from sales taxes that are regressive—has been spent expanding BART and Santa Clara Valley Transit Authority (VTA) light rail system, which serve higher-income residents, than the bus system, which is used by lower income residents.5 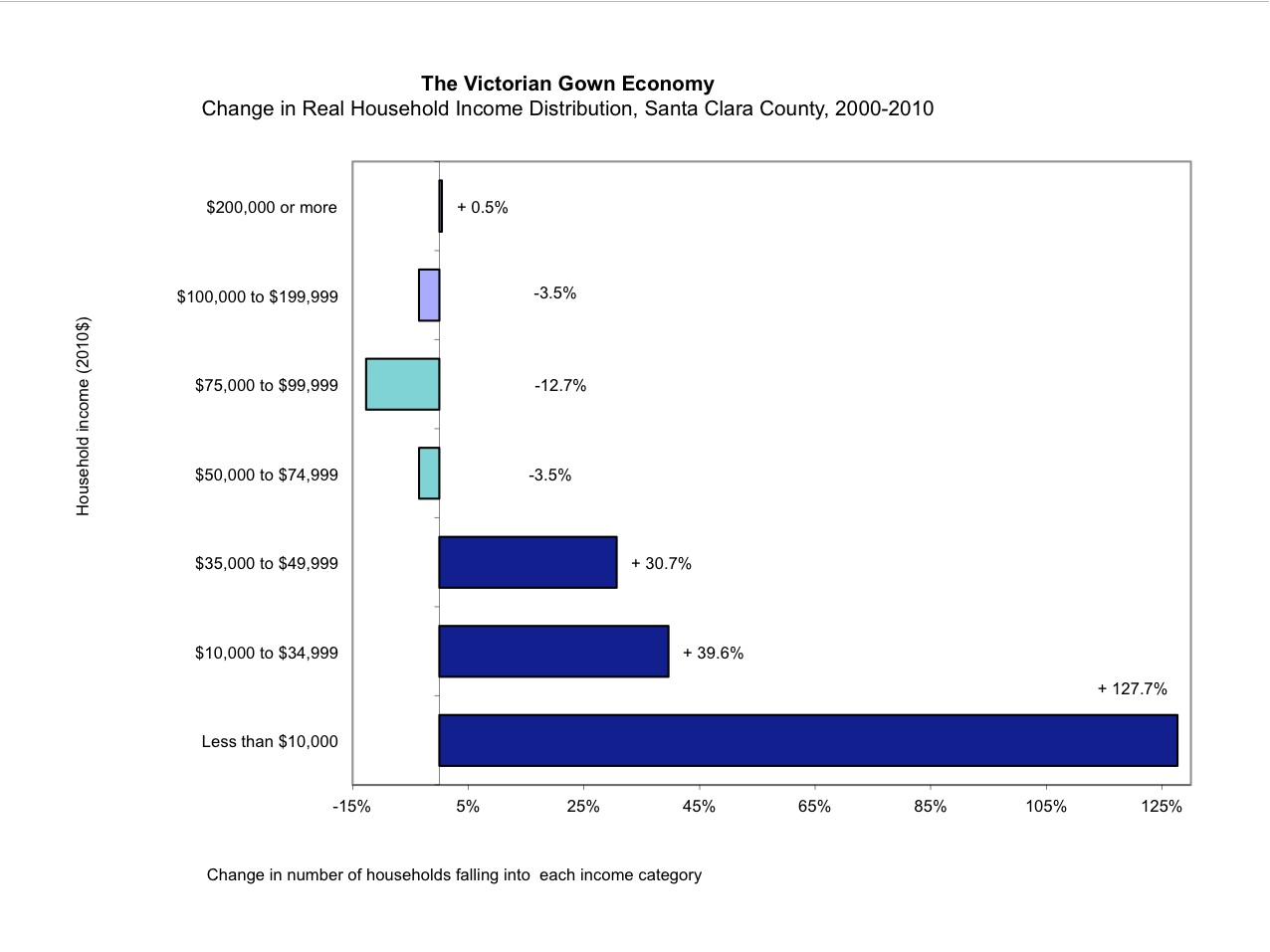 Housing
Study data suggests that the janitors choose to live closer to work to have a shorter commute, rather than live farther, in the less expensive exurbs and have a longer commute. “I feel that in the area where we live, it’s easier to find employment, for the young people who arrive, as well as for older people… even though it’s a very expensive city,” one janitor said. Another explained that she chose where she lives because “the convenience of having work nearby… [is] sustainable… We cannot look for jobs far from home, because gas is so expensive.” The cost of housing and transportation, as the two largest budgetary expenses, are intimately linked.6,7

The median monthly rent of the janitors surveyed is $1,675 a month and going up. To afford this rent, a household would need to earn $67,000 annually, or more than two-and-half-times the annual janitorial salary of $25,000. As one janitor explained, “I live in one bedroom and it costs more or less $1,200… That’s what I earn.”

The janitors report making a range of sacrifices to make ends meet: from living in overcrowded conditions with strangers, to working two jobs. “I think the most difficult thing I have done is to stop eating,” said one. “When I arrived in this country, I never imagined I would have to do something so cruel or so difficult or so hard as waiting to go into a room where I work so they would not see me taking an apple out of the trash.”

Conclusion
This study provides a limited but important look at the housing and transportation opportunities and constraints for a sector of the low-wage workforce living and working in one of the wealthiest and most expensive areas of the country. With an extremely low salary of $25,000 annually, the janitors are very vulnerable to fluctuations in the housing  market.  Ultimately, this points to the urgent need for more affordable housing in Silicon Valley, particularly housing near transportation. It also suggests that other tenant protections, such as rent control or just-cause eviction protection, may be crucial for stabilizing this population.

Janitors and other service workers could be a source of new ridership for VTA, since many live relatively close to their worksites. However, past funding priorities and the current transit service offered by VTA do not make public transportation a viable option for these workers. The extension of BART to San Jose and expansion of the light rail system have attracted the vast majority of Santa Clara’s local transit revenues in the last decade, and CalTrain may increasingly be more of a priority going forward.  These transit systems are generally utilized by the higher-wage workforce. However, the economic and environmental sustainability of the Bay Area requires that lower-wage workers also be able to access jobs and opportunity by means of frequent, reliable and affordable public transportation, which calls for major increases and improvements in bus service.

The extremely high cost of housing, the low wages, and the daily attempts to make ends meet are hardly unanticipated results of this study. What is more surprising, however, is the high percentage of low-wage workers still living in Silicon Valley. It’s not too late to make substantive housing and transit changes to improve both the daily lives of the Bay Area’s low-income workers and environmental sustainability.

Alexandra Goldman works as a Community Planner for the Tenderloin Neighborhood Development Corporation in San Francisco. She strongly believes that land-use struggles in Silicon Valley and San Francisco are interconnected.

4.    Janitors were allowed to select more than one form of transportation; hence the totals are greater than 100.

6.    “Commuting to Opportunity: The Working Poor and Commuting in the United States.” Elizabeth Roberto. Metropolitan Policy Program at Brookings. 2008.