We Will Not Be Moved 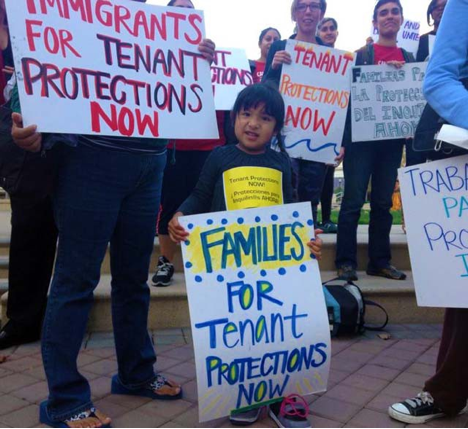 Working class urban dwellers are in crisis with growing numbers of evictions, an aging housing stock that is unsafe and in many cases uninhabitable, soaring housing costs, and the dramatic displacement of Black and Latino people.

For Latinos, the situation is growing dire as well. A study by the Mission Economic Development Agency and the Council of Community Housing Organizations found that the historically Latino Mission neighborhood went from being 50 percent Latino in 2000 to just 38.5 percent in 2013.

San Francisco may be ground zero for racialized displacement, but the problem is spreading. Skyrocketing housing costs are a key aspect of this phenomenon.

In Oakland, rents increased 12.7 percent last year, the second highest increase in the entire country, and the $2,412 median monthly rent is three times the national average. Further south, along the Bay Area Peninsula, in places like Redwood City and San Mateo, tenants report rent increases as high as 125 percent. According to the Metropolitan Transportation Commission’s 30-year projections, there will be a huge unmet need for affordable housing in the region.

Why is the state of affordable housing and the conditions facing tenants such a critical urban issue?

The Right to the City’s Rise of the Renter Nation report shows that the top 25 most populated cities in the country are all majority renter cities. 64 percent of San Francisco and 61 percent of Oakland’s population are renters. 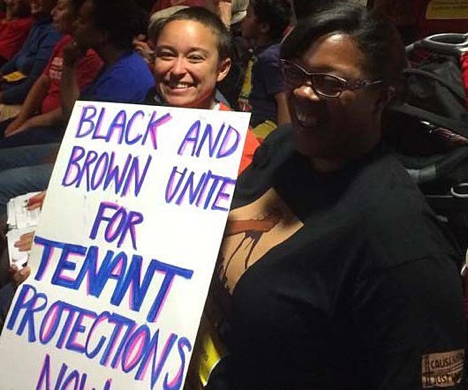 Harvard’s Joint Center for Housing Studies projects that there will be 4.7 million new renters in the next decade and that half of them will be seniors and the vast majority will be people of color. Dramatic as these figures are, they do not fully reflect the depth of the situation.

The 4.7 million does not include people who would like to rent but are unable to do so, including homeless individuals and families, who number over 600,000 nationally on any given day. They do not include people living in Single Room Occupancy buildings, those who are doubled or tripled up with family and friends, and many others in various forms of precarious housing. Neither do they reflect the almost 2 million mostly Black and Latino incarcerated men, who will face tremendous housing insecurity upon their release.

Speculation in single family housing played a key role in the foreclosure and subprime crisis and it is doing the same with the rental housing market.

Gentrification has created a housing crisis for urban working class tenants of color, which is compounding historic racial and economic fissures. Cities are racially and economically more inequitable than ever before.

Causa Justa :: Just Cause’s Development Without Displacement: Resisting Gentrification in the Bay Area report defines gentrification as a profit-driven race and class reconfiguration of urban, working class, communities of color that have suffered from a history of disinvestment and abandonment.

The process is characterized by the replacement of working class people of color with higher income residents willing to pay more for the housing.

Gentrification is driven by private developers, landlords and corporations and facilitated by public sector policies and revenues. Gentrification happens where commercial and residential land is cheap, relative to other areas in the city and region, and where the potential to turn a profit either through repurposing existing structures or building new ones is great. 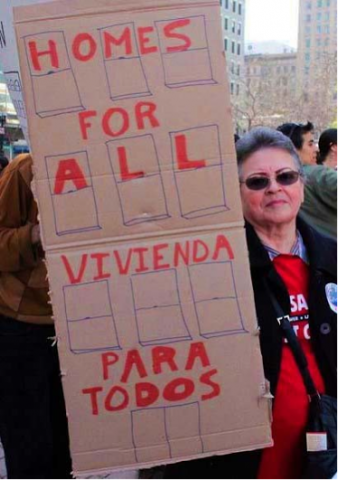 Enough is enough. We will not be moved. Our neighborhoods and cities are not for sale. Gentrification stops here and we are fighting back. Tenants are creating a new vision for urban development, one not driven by speculation but centered on human need. We are calling for tenant organizing for the right to the city.

Right to the City is a national formation of almost 40 community organizations based in 13 cities around the country. The alliance is dedicated to building a strong housing and urban justice movement nationally and internationally through an urban human rights framework and agenda.

The alliance has initiated a national Homes for All campaign to promote a new vision for housing justice based on the five principles of affordability, accessibility, long-term stability and protection from displacement, health sustainability and quality, and community control.

Based on the idea that tenants most impacted by gentrification and housing insecurity have to lead the creation of a new urban housing vision, Right to the City groups are organizing and supporting the leadership of working class tenants in cities across the country.

This year we will bring together a broad base of tenants and movement partners to Renter Assemblies nationally, where thousands of working families and individuals will share their stories, inspire each other and develop a plan for making change at the local, state and national levels. The Assemblies will build up through to 2016 where we hope to lift up the voices, vision and power of working class renters nationally to spark a national dialogue that will hopefully be a part of the presidential debates.

Here in the Bay Area, an emerging formation of faith, community and labor organizations is coalescing into a movement to expand protections, such as just cause laws, rent control and enforcement of healthy housing codes.Many are responding to the needs of their constituencies— the teachers, public servants and service workers struggling to find quality housing they can afford and increasingly being displaced out of the Bay Area. The existence of strong regional formations will anchor any successful effort to push for tenant rights at the state and national levels.

In California, there is an urgent need to repeal regressive laws like the Ellis Act and Costa-Hawkins, and to pave the way for real eviction protection and rent control. Dynamic local and regional organizing is the foundation upon which larger scale housing security will be achieved.

Tenant organizing and rights are a key aspect of a powerful anti-gentrification strategy. They are also necessary to an urban agenda centered on racial and economic equity and a healthy society for all people.

This is a call to action. Join us. Why? Because #HousingisaHumanRight @CausaJusta1

Dawn Phillips is the co-director of programs at Causa Justa :: Just Cause and is chair of the steering committee of the Right to the City Alliance.

Related Stories:
Urban Justice
Housing
Tweet
‹ Who Gets to Live Near Transit? up The Right to Rest ›