Organizing for the Rights of Filipino Women 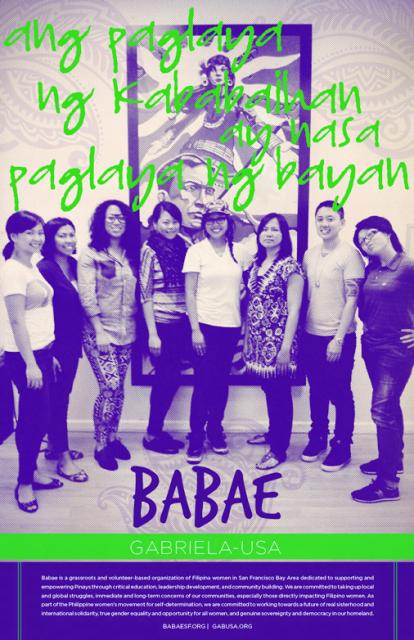 Tina Shauf is a community organizer and youth worker. She was born in the Philippines and raised in Los Angeles county. She is currently the Chair of Babae (meaning “woman” in Tagalog), a grassroots volunteer-based organization of Filipina women in San Francisco dedicated to supporting and empowering Pinays through critical education, leadership development, and community building. Shauf is also an active member and representative of the General Assembly Binding Women for Reforms, Integrity, Education, Leadership and Action (GABRIELA-USA), a grassroots-based alliance of more than 200 organizations, institutions, and programs of women all over the Philippines seeking to wage a struggle for the liberation of all oppressed Filipino women and Filipino people in general. GABRIELA-USA is the first overseas chapter of the Philippine-based organization, extending the Filipino women’s mass movement to the United States.

Christine Joy Ferrer: What issues are Babae and GABRIELA-USA currently prioritizing? And how do they impact low-income and communities of color where you live—especially Filipina women?
Tina Shauf: We’re taking on issues in the Filipino community, for women particularly, through the Voices of Women versus Violence Against Women (iVOW) campaign. Under the GABRIELA framework, Violence Against Women is defined as seven different things, including economic exploitation, political repression, sexual abuse, and domestic violence. So it’s multifaceted.

Also, Babae is co-sponsoring the Care Project at the Filipino Community Center in San Francisco where a group of caregivers comes together to understand better the conditions under which caregivers work. All of them are immigrants; they’ve left the Philippines because they had to support their families.

Four thousand people a day leave the Philippines— 70 percent are women. A lot of the jobs they take on are domestic work, caregiving. In a room full of Filipinos, if you ask, “How many of you know a caregiver or are related to a caregiver?” most would probably raise their hand. So we see a need to take this on.

Another thing is queer rights as human rights, understanding the multiple levels of oppression of queer immigrant folks.

Ferrer: What are some of the intersections between queer and immigrant rights?
Shauf: Right now we’re in a stage of understanding where our community’s like, “How do we view LGBTQ folks in general?” and “What are the issues faced by LGBTQ folks?”

Jay Mercado and Shirley Tan, a queer couple in our community, deal with not being recognized as a family even though they have twin boys and they’ve been together over 25 years.

A lesbian woman who leaves her country because she was in danger and has to go somewhere else to look for work—that clearly is a typical immigrant, but as a queer immigrant, she’s not even recognized as a mom to her kids.

Ferrer: How has Babae used iVOW and the Care Project to confront the challenges that all these different groups face and help them secure their rights?
Shauf: It’s been about three years since we took on iVOW as our national campaign. Initially we made it more of an educational campaign: around violence against women, domestic violence, the different forms of oppression, and the root causes. We hope to continue raising consciousness to political action based on our findings in each of the GABRIELA-USA—areas.

The hope is that our membership is inspired to continue organizing and will bring more people. And that they understand the reason we face these issues (whether we were born here or in the Philippines) is because our ancestors lived in a colonized country. On paper, it’s not colonized (now), but it’s run by imperialist powers, multinational corporations, and a corrupt government that exploits the land and people. That’s the reason why people leave.

The work is not just, “let’s push for these issues to be corrected.” It’s, “let’s understand the deeper causes.” Where’s the empowerment? Where do we have agency?

Ferrer: How has your Filipino identity and the fact that you’re a queer woman transformed and influenced your work?
Shauf: I think my work as an organizer has helped me unfold as a person. I’ve been able to come out. I’ve been able to understand the layers of oppression—not just as a Filipino, but as a woman—the need to fight for rights, to encourage other women to do the same.
I’ve learned I can’t just wait for things to change. If I understand it affects me and other women, whether we’re Filipino or another race, we have to come up with solutions by understanding causes. No one else is going to do it for us.

Ferrer: Going back to women’s issues, at the Global Women’s Rights Forum in March 2012, you spoke on a panel about transnational feminism and women in movements, uprisings, and revolutions. You raise a challenging question: Why is there a need for transnational movements? If things are moving in the Philippines, why even bother here in the U.S.?
Shauf: There’s a need for organizing outside the Philippines because 4,000 Filipinos leave every day. Why do people leave? Exploitative conditions. The people are not being prioritized. There are not enough jobs. The rising cost of basic needs like oil and rice. Services are going down. Services were pretty shitty to being with, but now it’s being slashed even more. There’s a need for movement building outside the Philippines because people can’t live in those conditions.

What’s important with this bill—it’s a way to highlight how women are viewed in Filipino society; to heighten the contradictions. Women’s reproductive health is not valued. So it affects the way we view ourselves.

When GABRIELA Women’s Party puts out legislation, whether it’s passed or not, what matters is it’s reaching the masses. People are starting to understand [what] we don’t have. We don’t have regular checkups when we are pregnant even though there’s a high need.

The largest income in the Philippines is remittances. When people leave, they have to send money home to support their families. Migrants are in over 196 countries, including the U.S. When they come to these receiving countries, the Philippine government does not protect them, so they’re victims of trafficking, exploitation, and wage theft. The Care Project is one way to understand that in a deeper and more personal way because it’s happening here, in our city.

Ferrer: What are the connections between local struggles and global struggles that can empower our communities for both the immediate and long term?
Shauf: There’s a reason why there are so many Filipinos all over the world. There should have been more of a choice. People should be able to [stay] if they choose, but that’s not the case. I think that is really key in understanding why we need to do movement-building here in the Unites States and other places.

Christine Joy Ferrer is the web and design editor for RP&E and founder of eyesopenedblog.com.

Related Stories:
Migrant Rights
Tweet
‹ We Can Labor With Love up Women's Work ›

END_OF_DOCUMENT_TOKEN_TO_BE_REPLACED
History of Exploitation: from Slavery to Domestic Work