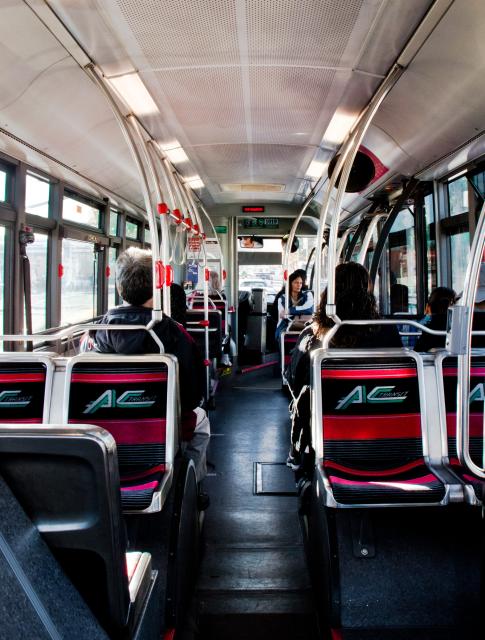 In spite of rising gas prices, worsening traffic, and growing public concern about climate change, voters in two of the largest and most diverse counties in the state rejected transportation tax measures (Measures J and B1) that promised to meet these important transportation needs. Yet, these same voters, only four years earlier, in the case of Los Angeles County, and 12 years before, in the case of Alameda County, approved similar measures (Measures R and B) with strong support. What has changed in that time and what does this mean for transit-dependent communities and their transportation justice allies?

Alameda County’s Measure B1, promoted by Urban Habitat and many of its allies, included many important benefits for low-income bus riders. These were critical funds to improve bus service and restore cuts in service, provide seed money for a county-wide free student bus pass program, make major investments in bicycle lane and sidewalk safety, as well as provide more money for paratransit for seniors and people with disabilities.  For this reason, B1 didn’t face the same grassroots opposition that Measure J did.

Like Measure J, B1 was a sales tax measure that would have continued to shift the transportation tax burden onto working families and away from corporations and wealthy individuals.  (This is one of the main reasons why, after much debate, Urban Habitat ultimately decided not to endorse the final B1 measure. We were also concerned that the tax would become permanent and that it lacked protections against gentrification and the displacement of low-income renters from neighborhoods well-served by transit.)

The rejection of J and B1 by the same voters who supported Prop 30 (the progressive income tax on the wealthiest 2 percent of Californians) is a signal that the public is recognizing that our current taxation system is unfair and that they are tired of footing the bill, while corporations and the elite pay less and less. This awareness provides bus riders and their allies with an opening to begin needed reform of our transit finance system—how we fund transportation as well as how we spend those funds. The change in how we fund transportation must begin at the national level by flipping the current distribution of federal funds which gives 80 percent to highways and only 20 percent to transit.  And it must continue down through every level of government, with serious consideration of new carbon fees, progressive income taxes, corporate taxes, and real estate transportation impact fees.

While B1’s defeat will mean more hardship for AC Transit riders, we are hopeful that it provides an opportunity for a more progressive county tax in the near future.

Lindsay Imai is the associate director of the transportation justice program at Urban Habitat.