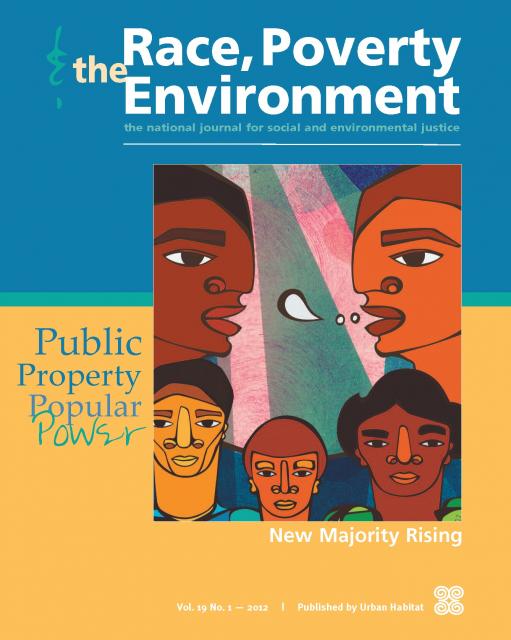 The confluence of the Occupy movement and demographic change is shifting the public discourse about class and race and breaking ground for new political spaces. In the tumultuous months since the February 2011 takeover of Wisconsin’s Capitol, Occupy Wall Street as well as actions at stockholder meetings of banks and protests by university students and faculty have shed light on who owns our wealth and how they use it. (Baham)* The failure of the recall effort in Wisconsin emphasizes the urgency of constructing new spaces in which our majority coalitions can come together outside the constraints of corporate-dominated political parties to develop creative and effective strategies.

Faced with the dual threat of a rising majority of voters of color in many key states and mass public demonstrations against economic inequality, the system is pushing back. Supreme Court decisions ceding increased power to corporations as “persons” have in effect privatized the election process. Right-wing strategists are backing voter suppression and anti-immigrant legislation in states across the nation, seeking to fan racial animosity and redirect popular anger toward scapegoats (Keyes et al., Lewis, Kromm, Bacon).

As Governor Scott Walker explained to one of his billionaire backers, the public workers in Wisconsin got the brunt of a classic “divide and conquer” strategy—but instead of going after immigrants, gays, or women, this attack targeted workers who are one step up on the economic ladder: public sector employees.

The passage of laws restricting voting rights, the withdrawal of Federal oversight and Union troops, and even the violent overthrow of African American elected officials by militias brought an end to that era.

In 1886, ten years before the infamous Plessy v. Ferguson decision that enshrined ‘separate but equal’ as the law of the land, the Supreme Court turned the Fourteenth Amendment on its head by extending personhood to corporations (Santa Clara v. Southern Pacific); thus twisting a constitutional amendment written to protect the due process rights of newly freed slaves to serve the white male property owners who controlled the railroad corporations (powell and Menendian).

Corporate dominance in the Americas did not, however, begin with that 1886 decision. Jamestown, the very first colony of what would become the United States, was established in 1607 by a corporation chartered by the king of England to exploit the New World. While the American Revolution provided “the people” with a bill of rights, it left control of the economy and the government firmly in the hands of the white male property owners who selected the representatives of “the people.”

This tension between popular democracy and economic oligarchy vibrates throughout our history. The civil rights movement of the 1960s won voting rights and anti-discrimination legislation even as Southern Senators filibustered. Activists used these tools to make huge strides in reducing poverty, increasing educational opportunity, and integrating housing over the next decade. But campaigns for full economic justice, such as the one led by Martin Luther King Jr. immediately before his assassination, were turned back.

As succeeding waves of popular participation have widened the definition of who can participate in political democracy, economic decisions have been removed from popular control and ensconced with corporate entities that are protected from the will of the majority. Corporate deregulation became the ruling principle of both the Reagan Republicans and the Clinton Democrats. Formerly public facilities, such as K-12 education, public universities, free lending libraries, and even entire downtown shopping districts, are being privatized and subjected to corporate control (Weiner, Drummond-Cole).

Back to the 21st Century
In 2010, as demographic evidence showed that the sheer numbers of African American, Latino and Asian voters had turned the tide in the 2008 elections, the Supreme Court once again stepped in. In Citizens United v. FEC, it found that corporations now enjoy not only the right to be protected from “unequal” taxation by state and local governments, but also a First Amendment right to spend as much of that tax-protected money as they choose to elect candidates to office. This grant of unlimited corporate speech is no more coincidental than the grant of personhood to corporations following the post Civil War social and economic changes.

U.S. workers, outraged at losing jobs to outsourcing, homes to foreclosure, and educational opportunity to budget cuts, now confront an unresponsive political system that is bought and paid for at nearly every level. The enclosure and privatization of formerly public spaces—including the civic auditorium in Oakland—has reduced the number of places where we can congregate in a commons (Allen-Taylor).

Even if Walker’s Democratic opponent had prevailed in Wisconsin, workers, low-income people and communities of color would still face the same dilemma: How do we build an effective movement that can win concessions from power, not just elect politicians?
For the halls of power to offer meaningful change in our economic system, we need a movement that poses an actual threat to their control of the economy and provides an alternative that meets the real needs of our communities. We need to create political spaces in which such a movement can form.

The Shape of Things to Come
Oakland’s general strike in November foreshadows what such spaces might entail. The rank and file of the unions pushed the leadership into the streets and neighbors from around the Bay swelled the crowd to over 100,000. While a one-day shutdown of the Port of Oakland had relatively little impact on the economy, it was enough to frighten the corporate establishment into a militarized crackdown and media vilification that has kept such phenomena from spreading nationwide. The virulence of the reaction reveals that this approach hit a vital nerve.

Creating new political spaces where people move outside the confines of identity politics, social service, business unionism, and politics as usual is underway.

Young activists of color now coming of age are organizing on all fronts (Martinez, Rodriguez, Hussain, Liu, Rivera, Nunez, Matthews, Tran, and Banks). Common principles and practices are emerging. While in some respects we need a “new strategy,” more fundamentally, we need to return to the oldest strategy: mobilizing the broadest possible spectrum of people to defend our common interests. At a crucial juncture in the civil rights struggle, the direct action advocates in the sit-in movement made common cause with proponents of voter registration drives (Hartford). A successful movement for change in the 21st century will need to do likewise.

Women make up 51 percent of the population and whatever forms the political spaces of the new majority take, women of color will be central. Feminist methodologies of inclusion, consensus-building and confrontation have been taken up by the next generation of student activists (Baham), and in progressive organizations across the country, women’s voices and women’s labor are shaping a new reality (Ferrer).

Understanding that the electoral system is dominated and controlled by corporate power doesn’t mean that we should abandon efforts to protect the right to vote and exercise the power we do have in that arena. Long-term trends run in our favor. As the next generation of activists comes to understand the way the game is rigged, we can unite to change the rules so that an organized new majority can bring democracy to the economic realm.