Sit-ins and Voter Registration in 1960 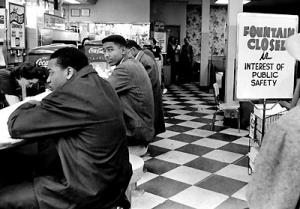 In 1960, the young civil rights movement faced a split between advocates of direct action and electoral work. The movements for justice today face a similar divide, between direct action strategies, such as Occupy and more traditional efforts to advance the agenda through the electoral system.

In the summer of 1960, Amzie Moore, Medgar Evers, and other local Black leaders in Mississippi told Bob Moses that they needed help with voter registration more than they needed demonstrations against segregation. He promised he would return in the summer of '61, and in July, he began voter registration work in McComb, Mississippi. Staunch long-time Movement supporters, such as Harry Belafonte and many of the Student Nonviolent Coordinating Committee (SNCC) leaders also believed that SNCC should focus on voter registration rather than direct action, such as sit-ins and Freedom Rides. They argued that poor, rural blacks had no money for lunch counters or other public facilities and that what they needed most was political power that in Mississippi had to begin with winning the right to vote.

Other SNCC leaders—many just released from Parchman Prison and Hinds County Jail—argued that the Freedom Rides and other forms of direct action must continue. The protests were gaining momentum and bringing the Movement into the darkest corners of the Deep South, raising awareness, building courage, and inspiring young and old. They were deeply suspicious of?  President John F. Kennedy's demand that they switch from demonstrations to voter registration, and they were unwilling to abandon the tactics that had brought the Movement so far in so short a time.
In August, the issue came to a head when SNCC met at the Highlander Center in Tennessee. After three days of passionate debate, SNCC was split right down the middle—half favored continuing direct action, the others favored switching to voter registration. Ella Baker proposed a compromise—do both. Her suggestion was adopted.

Amid the fires of the Freedom Rides and the heat of debate, SNCC as an organization was rapidly evolving away from its campus/student roots. More and more SNCC activists were leaving school to become full-time freedom fighters. With money raised by Belafonte, first Charles Sherrod, then Bob Moses, and then others were hired as SNCC &quot;field secretaries,&quot; devoting their lives to the struggle in the rural areas and small towns of the South.

As so often turns out to be the case, when committed activists passionately disagree over strategy, both sides are proven correct. Both direct action and voter registration are needed. Each supports and strengthens the other. The determination and courage of student protesters inspires and encourages their elders, and the growing political power of adults organized around the right to vote supports and sustains the young demonstrators. Instead of splitting the organization apart, they forge a unifying compromise. By respecting that fellow activists could passionately disagree over strategy and tactics—yet remain allies—they strengthened SNCC and the Movement as a whole.

In 2012, supporting candidates and ballot initiatives are not really equivalent to fighting for full citizenship for African Americans as in the 1950s and 60s. Then, voter registration was an assertion of equal citizenship and social equality against white-supremacy. Voter registration was a more radical and confrontational challenge to the powers-that-were than were direct actions, such as Freedom Rides and sit-ins. Far more people were killed and jailed fighting for the vote than were for sit-ins against segregation. So, in a sense, it turned out that voter-registration was a form of direct action.
That said,  our movement today has to incorporate both direct action and electoral engagement. It is as true today as it was back then. For me, the most important lesson is that by respecting the fact that fellow activists could passionately disagree over strategy and tactics—yet remain allies—they strengthened SNCC and the Movement as a whole.

Bruce Hartford was active with CORE, SCLC from 1963-67 in Alabama, Mississippi and California. This article is excerpted from a timeline of the Southern Freedom Movement during the years 1951-68, published at crmvet.org.

END_OF_DOCUMENT_TOKEN_TO_BE_REPLACED
The Earth Is the Only One Telling the Truth