Selma to Montgomery March: From Voting Rights to Immigration 1965-2012 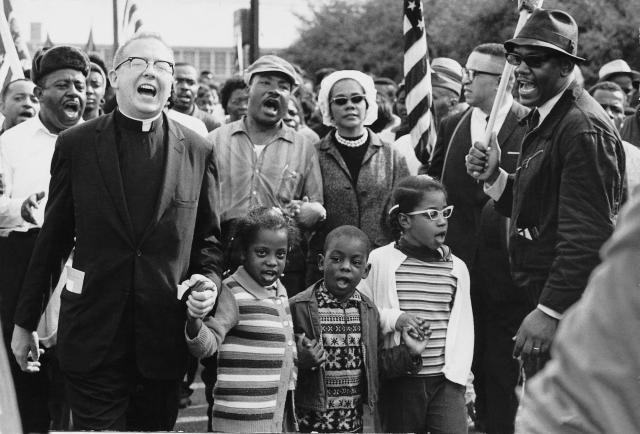 Every year, the NAACP holds a rally from March 4-9 to commemorate the Selma to Montgomery march and draw attention to the issues facing African Americans in America.  Since the passage of Alabama’s HB 56—the nation’s worst anti-immigrant law—the NAACP has reached out to organizations around the country to build lasting relationships between Civil Rights and Immigrant Rights communities over their common history of struggle. The event marks the coming together of a broad movement for a renewed call for civil rights in America. This year, a core part of their agenda was a demand to repeal HB 56.

Gamaliel, a grassroots network of non-partisan, faith-based organizations in 18 U.S. states, South Africa and the United Kingdom, is now taking on the voting rights issue. They are working together with the NAACP and other social justice organizations on “Get out the Vote” initiatives for the Fall elections.

Among the participants in the Selma to Montgomery march this year was 28-year-old Carlos Pinedo, who emigrated from Mexico with his family at the age of eight. In the racially diverse community in Chicago’s South Suburbs, young Pinedo soon became conscious of the tensions and boundaries between blacks, Latinos and whites and quickly adopted the racial stereotypes he learned from his new friends. Growing up in Blue Island, Illinois, Carlos and his brother Jose became targets of racial profiling themselves. Things took a nasty turn when Jose was arrested by ICE officers in front of his mother on Mother’s Day for failing to present a state-issued picture ID to police officials who were questioning him for no legitimate reason. He was deported to Mexico, leaving behind his family and newborn child.

The incident prompted Carlos to become a leader with the South Suburban Action Conference (SSAC) and Gamaliel’s Civil Rights of Immigrants Task Force, working to raise awareness about racial profiling and its negative impact on families. In 2010, SSAC was able to persuade Blue Island Mayor Donald Peloquin to sign a resolution allowing undocumented immigrants to present the Matricula Consular as a valid form of identification. 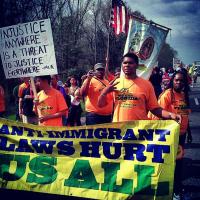 Pinedo decided to participate in the march because, as he says, “I felt that now more than ever, I needed to show my community that what I have been working for is really worth it. In this way, I can stand for the ones who have no voice.”Florida Immigrant Coalition marches from Selma to Montgomery, 2012. Courtesy of Equal Voice News.

The march made Pinedo acutely aware of other communities all over the U.S. who have been fighting for the same thing—namely, human rights.

The Reverend David Bigsby, co-founder and president  of the Gamaliel National Clergy Council, also attended the march. He was at Morehouse College in Atlanta during the 1965 Selma-Montgomery March. “Voting rights were especially important to me because neither my parents nor anyone in our family had ever voted, except me,” he recalls. “They feared what would happen if they attempted to register. Most of them could not read very well and did not think their vote would make a difference. The 1965 march caused my father to find the courage to vote for the first time. He had served in WWII but did not feel he was a valued citizen.”

One young leader with Gamaliel, Eliza Perez-Montalvo, is responding to the call for renewed black-brown unity, saying: “Marching today is the beginning of my journey.”

END_OF_DOCUMENT_TOKEN_TO_BE_REPLACED
The Earth Is the Only One Telling the Truth