“Different people who have been disaffected and disenfranchised by this economic system have had a space to come together.” —Steve Williams 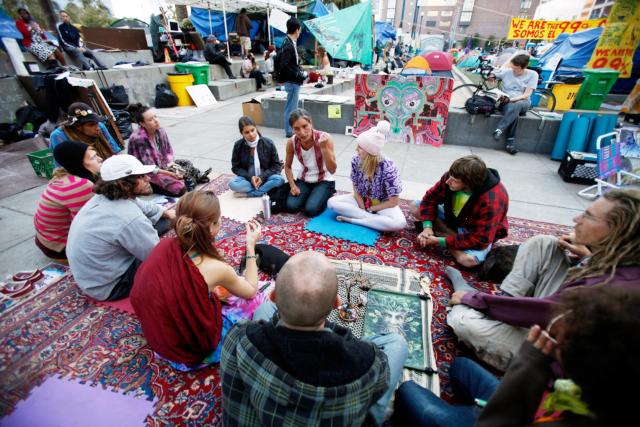 In a country with a history of white supremacy, colonialism, genocide, slavery, we know that we’re going to encounter some particular challenges around racial consciousness, around the leadership of women, around the role of young people. But what the “We are the 99%” movement has created is an opportunity for us to actually engage in those struggles from a progressive standpoint.  The movement is still very new, so the language is all coming together, but in my mind this movement is a movement of the 99%. The occupations are a particular tactic of that movement. So, there are a lot of people participating in the movement to confront financial institutions and capitalism that aren’t sleeping out at the various parks across the country. It’s critical for us to figure out ways for people to engage constructively because our organizations that are rooted in working class, communities of color have been doing the organizing around a particular strata of the 99%. It is important to acknowledge that the petty bourgeois and technocratic professionals who are now disaffected by the way that capitalism is operating— those people should be mad. But we also have to then figure out the programs and solutions and demands that we are all going to fight for that don’t throw sections of the 99% under the bus.

The “We are the 99%” movement has to develop a vision of what our alternative is. The exciting innovation with the camps is that different groupings of people who have been disaffected and disenfranchised by this economic system have had a space to come together. Folks who have had their homes foreclosed upon, folks who are in debt and can’t find a job after graduating from elite universities—are coming together with homeless people and with other folks who have just seen public services cut and attacked over the last few years. And I think what’s happening with that is that people are beginning to develop more and more of a systematic analysis of what is wrong. But ultimately that means that we have to do more, way more, than elect a sympathetic person into office.

We’re really building on a level of organizing, a level of mobilization that puts us in a position to begin transforming what it is that we’ve previously thought of as a liberation movement in this country.

Steve Williams is a co-founder and co-executive director of People Organized to Win Employment Rights (POWER), a San Francisco-based group building power for low-wage workers, tenants, and families. This article is an edited excerpt from a roundtable interview conducted by Meaghan LaSala on the Making Contact program of the National Radio Project (www.radioproject.org).