“Convergence on joint actions between existing organizations and Occupy is the first step...” —María Poblet 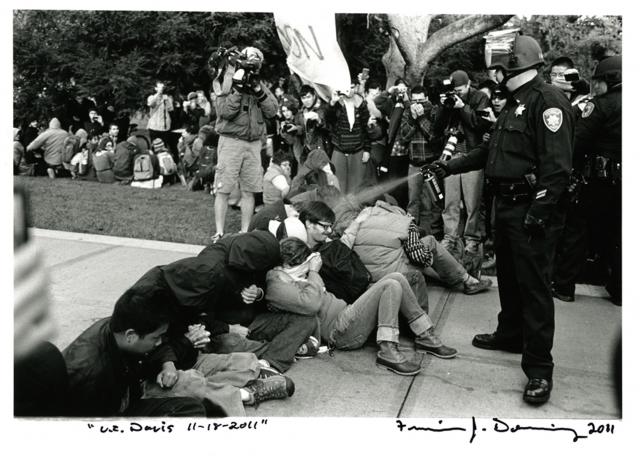 People of color who’ve interacted with the occupy camps [say they don’t show] enough clarity about racism, gender inequality, poverty, and issues of class.  And I think that critique is right on. I think the challenge before us is: can we lead from a place of unity?

On the national scale now white, working class communities who’ve been impacted by these measures of austerity and by this corporate takeover, they have a choice between the Tea Party and Occupy. And I want all of them to choose Occupy. It’s very needed in this country for people to have a choice that takes them to the left in the face of corporate domination, instead of basically  joining the Tea Party and moving to the right and blaming immigrants, blaming people of color. [As] the racial dynamics get handled in the camps, that’s where and how we’ll see if the movement will be able to proceed in a way that actually builds the capacity to build more unity and move towards a progressive outcome that benefits all communities.

In the more institutional progressive sector, there’s the idea that you elect somebody who’s a Democrat and then you look the other way and cross your fingers. That has never worked for people of color. In fact, where people of color have won great demands in this country is by challenging the Democratic party with all kinds of tactics, including threatening to start another party and starting another party. It has to go back to this platform, this list of what we want, this vision of where we’re headed. Then we can say to any elected official, “Get in or get out,” “Come with us, or don’t.”

Convergence on joint actions between existing organizations and Occupy is the first step to what we need. Then we can actually move towards something that would be much bigger—like, what if the 99% in the U.S. called for no war, no warming—build the economy for the people and the planet. What if we did that? What would that look like? It would then say—there is one alternative—and we’re building it right here, right now, because another world is possible... but also, it’s absolutely necessary. And in order for another world to be possible, another U.S. has to come into being. This Occupy movement and the convergence between this and previous generations, and community organizing and other sectors of progressives, this convergence is actually going to make that other world possible.

María Poblet is the executive director of Just Cause::Causa Justa, a housing rights group in the San Francisco Bay Area. This article is an edited excerpt from a roundtable interview conducted by Meaghan LaSala on the Making Contact program of the National Radio Project (www.radioproject.org).