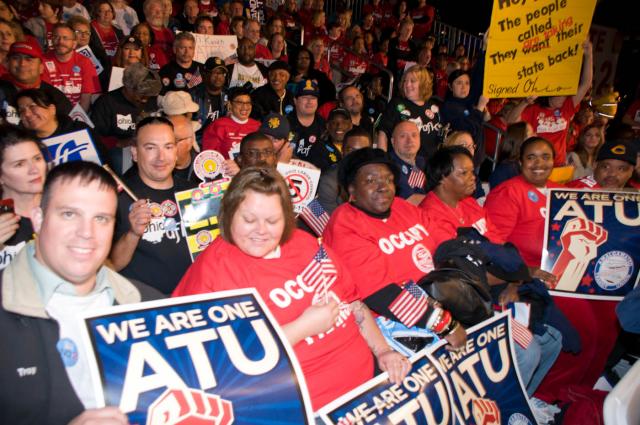 Ohio’s unions won big in the November 2011 election when they overturned Senate Bill 5 by a 61 to 39 margin, handing Republican Governor John Kasich a defeat and continuing labor’s recent ascending trajectory. The unions’ success in Ohio suggests that Kasich may be a one-term governor, that Republican control of the state legislature may be overturned next year, and that right-wing, anti-union governors like Kasich in Ohio and Scott Walker in Wisconsin are an endangered species—and one that voters plan to make extinct.

Senate Bill 5 was voted up soon after Kasich took office in January. Legislators passed it in March, despite demonstrations by thousands of public employees and private sector workers at the capitol in Columbus. SB5 affected about 400,000 public employees, limiting their ability to bargain collectively, collect dues, and strike. The law also established “pay for performance” and required workers to pay 15 percent of their health care. Workers were furious.

Ohio unions, working closely with the Democratic Party, acted quickly to take advantage of the state’s referendum law, eventually collecting a record 1.29 million signatures. The state then certified 915,456 signatures—another record—putting the measure on the ballot.

The We Are Ohio coalition spent $30 million, including big investments from national unions, on a campaign that involved thousands of members from AFSCME, teachers’ unions, firefighters, and many other public and private sector unions who canvassed neighborhoods and phoned voters. Teachers’ unions in Ohio levied additional dues to help pay for the campaign.

Interestingly, the same Ohio voters who saved collective bargaining for state workers also overwhelmingly approved Issue 3, aimed at limiting President Barack Obama’s health care program. Issue 3 states that no federal state or local law could compel any person or employer to participate in a health care system. This question is now before the courts.

Connect the Dots
The success in Ohio forms part of labor’s recent ascending trajectory—the Wisconsin labor protests in February and March; the Occupy phenomenon that allied with unions and spread from Wall Street nationwide; and the Occupy Oakland march that shut down the port on November 2, 2011. Even if each struggle has not resulted in victory, the temperature is rising.

The union movement, rallying after 30 years on its heels, is testing its strength in the streets and in the political arena. The Democratic Party is anxious to channel the new energy, both in the institutional union form and in the new, more amorphous movement form, into the 2012 elections.
The split vote in Ohio on Issues 2 and 3, and the difference between the unions on the one hand and the Occupy movement on the other, suggests that getting voters to the polls in 2012, and getting them to follow the lead of the AFL-CIO/Democratic Party alliance will not be simple. In some parts of Ohio the unions kept Occupy at a distance, afraid that allying with radicals would cost them middle-ground votes on Issue 2. In other parts, like Cleveland, the occupiers backed the union position.

As we connect the dots from Madison to Oakland to Ohio, we wonder where the next dot will be. The interesting question is: how will the next uprising affect politics?

Dan La Botz is a teacher in Cincinnati and active in the Occupy movement. He is the author of A Troublemaker’s Handbook.