From Civil Rights to Economic Justice 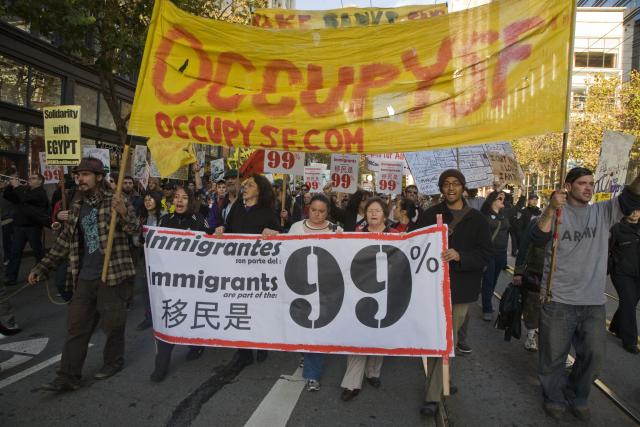 The Autumn Awakening underway across the United States is an inspiring moment of hope after decades of overt social, political, and economic reaction. The arrival of the Occupy movement was heralded by the student-worker-citizen occupation of the Wisconsin state capitol last winter. But just a few months ago, a sign bearing the words, “If Egypt can do it so can we” signaled a plaintive cry more than a compelling mandate. The formulation, “We are the 99%” articulates a new, broad-based democratic politics focused on economic justice. While the slogan is by its nature inclusive, the emerging movement is still coming to terms with the fact that the majority of the 99% are women and people of color. (See On Occupy)  In this issue, we take a look at how the changing demographic complexion of the United States is shifting the political calculus in many arenas—electoral, economic, and in the new movement called Occupy.

Driven by displacement and gentrification (Bullard) and in search of jobs, housing, and education, African Americans, once confined to the South and the urban core, are on the move (Sullivan, Kromm). Some see the departure of African Americans from the cities as a threat to the community’s political power, while others see new opportunities for people of color to build a historic new coalition.

Historical patterns of segregation in suburbs and exurbs like Pleasanton are being overturned as economic justice advocates push for equity in new areas (Rein,  Schafren). Latinos, the fastest growing ethnic group in the country, are coming into new prominence, both as voting blocks in key swing states and as vilified immigrants subject to racial profiling and racial exclusion (Vargas, Eaton). At the same time, as part of a voter suppression strategy, many states have passed laws restricting the right to register to vote (Celock). Incarceration (increasingly in for-profit institutions) and the denial of a path to citizenship for immigrants are excluding people of color from the electoral process (Sakala, Kilgore).

Every 10 years, the U.S. Census sets in motion a constitutionally mandated process of re-aligning voting districts to reflect population changes in federal, state, and local jurisdictions. California carried out its redistricting through a Citizens Commission for the first time (Galambos Malloy), but in most states, tried and true political in-fighting, followed by extensive legal challenges, is now underway (Rowe, Abdullah).

In California, where people of color are the new majority, African American communities were able to preserve their political position; Latino communities saw an increase of 10 districts with Latino majorities; and a new district with majority Asians was created. With redistricting for local jurisdictions starting up under the new California Voting Rights Act (which has more teeth than the federal legislation), organized communities of color stand to gain even greater electoral representation (Cedillo).

In places like Mississippi, African Americans and Latinos have made common cause to turn back the kind of legislative assault on immigrants seen in Arizona and Alabama (Eaton). In Ohio, a revitalized labor-community coalition won a referendum overturning the state government’s attacks on public employees (La Botz). But even if emerging majority coalitions can win elections, they will confront an obvious and glaring flaw in the current system: political power is not actually allocated on a one-person, one-vote basis. The reality is much closer to “one-dollar, one-vote”. Using campaign cash, lobbying, interlocking directorates, and revolving-door regulatory positions, ‘the 1%’ exert overwhelming influence on writing and passing legislation that governs this country at every level.

For decades, progressive policy institutes and think tanks have been methodically researching and proposing legislative and administrative strategies for making the U.S. a more equitable society(Treuhaft). For example,  African American unemployment rates, which have long been  double those of whites (Kroll), could be reduced by hiring African Americans for public infrastructure projects (Arce, Quamie). Progressive forces don’t lack policy remedies for increasing equity, rather they lack the political force to move these solutions into reality in a system owned by the rich. Real solutions have been rejected, and rejected, and rejected, until finally, the excluded 99% are now awakening to the fact that the system is broken.

We are now beginning to see glimmers of the sort of force that might be able to change this system—not just in the Occupy movement but in unions once again starting to find their voices; in the courage of prisoners in solitary confinement going on hunger strike; in the massive educational fora that have sprung from the World Social Forum, and above all, on the international stage where imperial power has over-reached militarily and economically. If these factors converge with an empowered, diverse electorate, progressive forces will begin to see more victories like the one in Ohio. We can hope for new coalition formations, which can connect emerging majorities to unions and community organizations to begin implementing a positive prescription for jobs, fair and affordable housing, public transportation, universal health care, decent education, and other vital needs (Poblet).

A system as entrenched as that of the United States will not be transformed easily. Capital uses many tools to ensure its survival—among them, mechanisms of state power, such as the highly militarized police forces that have displaced Occupy encampments in city after city. Disinvestment after the riots in Detroit might be seen as a response to the globalization of industry, but it can also be understood as a political and economic response to the pressure from unions for living wages, and from African Americans for political power in municipal governance.

In the wake of the 1967 riots that marked the beginning of Detroit’s decline, Martin Luther King Jr. and the Southern Christian Leadership Conference (SCLC) launched an effort to move the civil rights movement towards more explicit struggles for economic justice. King’s support of the sanitation workers in Memphis was part of this strategy. After King’s assassination, Ralph Abernathy Sr. continued to lead a Poor People’s Campaign to arouse the nation to address the deep and visible inequalities between rich and poor. Caravans from across the country converged on the nation’s capital to stop business-as-usual with civil resistance, and established a massive encampment known as Resurrection City. Despite the SCLC’s valiant efforts, police put an end to that occupation after six weeks. Abernathy spent three weeks in jail for refusing to evacuate and the effort to move civil rights victories into the economic realm failed.

Four decades later we have a new opportunity to bring the causes that King championed at the end of his life to the next stage (Lawson).
It won’t be a short struggle. Ten months after the fall of Mubarak, it’s apparent that the mass mobilizations of the Arab Spring were only the first stage in winning freedom and dignity for the Egyptian people.

Our own Autumn Awakening is tentative. To come to fulfillment it will require systematic organizing on all fronts: in the streets, in the courts, in elections, and in occupations of public and private spaces, and reclamation of resources that are monopolized by the 1%.

The intersection of the emerging Occupy movement with the heirs to the institutional victories of the civil rights movement creates challenges for both. For the Occupy movement to become capable of making change, it must recognize that people of color make up a growing share of the 99% and that racial injustice is integral to the economic system. But established organizations and movements that have been working on these issues for decades are also challenged to incorporate the tactics of mass civil resistance used by Occupy, and to articulate strategies that can transform an entire system that is dependent on racial and economic injustice for its functioning. The awakening of conscience now underway will need to be fueled by practical accomplishments—but already we see new horizons opening for the first time in many years, and hear conversations about class all over the public square.