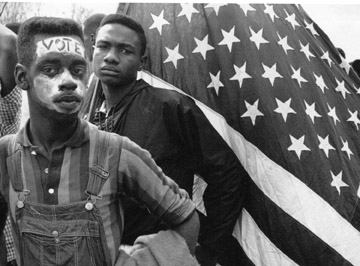 According to a new report, millions of voters may be denied the right to vote under new laws adopted in a dozen states. The study, released last August by the Brennan Center for Justice in New York, says that new voting laws regarding (1) photo identification requirements, (2) elimination of same day voter registrations, (3) proof of citizenship requirements to register to vote, (4) rule changes for voter registration drives, (5) reduction in early voting days, and (6) restoration of voting rights to convicted felons will make voting harder for over five million people in the 2012 election.

The report also projects that the new laws will have the greatest impact on minority voters because African Americans and Hispanics are more likely to register to vote during voter registration drives in Florida, and the new photo identification requirements in Alabama, Kansas, Tennessee, Texas, and Wisconsin would exclude up to 3.2 million citizens, mostly minorities, who do not have government-issued photo IDs. Alabama and Kansas require new voters to present proof of U.S. citizenship at the voting booth, while Tennessee requires new voters who have been identified in a database as potential non-citizens to submit proof of citizenship.

Kansas Secretary of State Kris Kobach (R) had made the proof of citizenship and photo ID proposals the key elements of his platform during his 2010 campaign. Last May, he told the Wichita Eagle that while he was pleased that the two proposals had passed, he wanted to see the state’s election laws made stricter by giving his office power to prosecute voter fraud. Kobach’s opponents argue that the laws will suppress voter participation in Kansas.

Also according to the report, Ohio has eliminated voter registration during the state’s week-long early voting period, while Maine passed a law eliminating voter registration on election day. (This law was struck down on November 8, 2011, by a referendum put on the ballot by grassroots groups.) The states of Florida, Georgia, Ohio, Tennessee, and West Virginia have also adopted laws reducing local early voting periods as well. But the battle for the right to vote has just begun.

“The book isn’t closed for 2012,” says Wendy Weiser, co-author of the report. “We are seeing push back… and voter-led efforts in a variety of states. We do anticipate that even though there might be changes, this will have a significantly negative impact on voters in 2012.”

John Celock is state politics reporter and Patch liaison for The Huffington Post.

END_OF_DOCUMENT_TOKEN_TO_BE_REPLACED
The Earth Is the Only One Telling the Truth