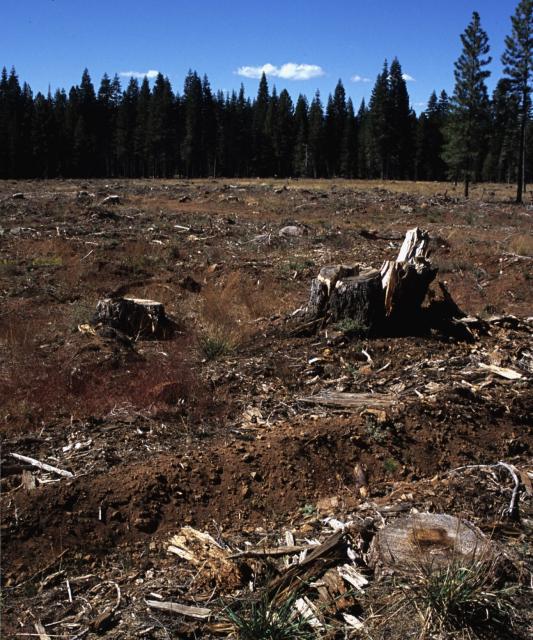 As part of the now stalled program, the new regulations from California Air Resources Board (CARB) would allow forest offsets that utilize an industry practice known as “even-age management.” Timber industry experts say this practice of cutting a large tract of trees all at once mimics nature. Some environmental advocates call it “clear-cutting,” noting that this kind of management can actually increase carbon dioxide emitted at the logging site.

Ignoring the carbon emissions that come from these kinds of projects “makes it much more likely to paint a clear-cutting project as carbon-[reducing] positive than a carbon negative,” said Brian Nowicki, California policy director for the Center for Biological Diversity. His organization is one of many that object to these rules.

So far, at least 37 individual projects, which could employ these techniques, have been registered for carbon offset credits. These projects span the country in 11 states—from Washington state to New Hampshire. California has the most, with nine projects, followed by South Carolina with eight, and Maine with six.* However, only one project using “improved forest management” has actually received carbon credits, totaling 9,248 tons offset from 2007 to 2009. The Lompico Forest Carbon Project is located in Santa Cruz County, California, developed by the Sempervirens Fund.

Dozens of people showed up to state their position at the CARB meeting on December 16, 2010.  Michael Endicott, a representative from the California Sierra Club, reminded the board that his organization has been submitting comments since January. “We ask that you go ahead with reforestation projects, preventing the conversion of native forests to tree farms,” adding “clear-cutting is not ready for prime time.”

Tim Feller, a registered professional forester said that he has used both even aged and uneven aged management, and both can absorb carbon dioxide from the atmosphere and maintain sustainable forestry.

At least a dozen people who live near where a major timber company, Sierra Pacific Industries operates, told stories of lumber trucks clogging the roads and the impact on wildlife. One woman brought a pine sapling to show what kind of trees the timber company would replant.
One young boy called clear-cutting “a sin.” When he spoke, a hush fell over the audience of about 250 people. “When they clear cut, bugs, animals, and even dirt are harmed, and that is no solution. Let the forests stand. It is part of you. Trees breathe for you and for me.”
The boy’s 13-year-old sister spoke about the impact in her community. “Last year Sierra Pacific sprayed nearly 70,000 pounds of their pollution in my county for clear-cuts. You should know, I used to live in a town that had mills. Loggers used to have jobs and work. Clear-cutting takes one man, one machine… what are you leaving for your children?”

However,  Gary Gero, President of the Climate Action Reserve—the largest voluntary carbon offset market on the West Coast—spoke on behalf of the measure. He insisted the rules do not provide “incentives” for clear-cutting, noting that any tree cut down must be replaced in order to receive a carbon credit.

After an entire day’s worth of testimony from hundreds of people on both sides of the cap-and-trade program, board members discussed whether to remove the most controversial forest portion, which could include clear-cut tracts of land of up to 40 acres.

Dorene D’Adamo, a laywer and member of the board, drafted an amendment to modify the protocol, preventing any new forest offset projects using “even-age management.” D’Adamo’s amendment failed when her eceived the support of only three other members. In the end, the board voted 9-1 to pass the cap-and-trade system with Dr. John Telles, a cardiologist, as the lone vote against this approach to regulation.

Now that the implementation of the plan has been blocked, environmental justice groups are trying to convince CARB to consider the alternatives. The forestry groups continue to work to amend this portion of the offset plan, despite the fact that the agency has stated that it will not begin to revise the forest rules until next year. The Center for Biological Diversity’s Nowicki noted the judge’s ruling has not affected their strategy.
“We are going through the administration, the Secretary of Resources, every avenue we have… from legislation to administrative changes, to conversations with people who know what is happening at CARB, to get them to take up these issues.”

*New Hampshire and Virginia both have three; Arkansas and Tennessee have two, Georgia, Washington, Oregon and North Carolina have one.

Mark Schapiro is a senior correspondent at the Center for Investigative Reporting (CIR). Sarah Terry-Cobo is a freelance reporter and research assistant for CIR's Carbon Watch series.  This article was first published by California Watch and is reporoduced with permission.