Home is more than simply a place. It is a connection to a community of people, the comforts of familiar sights and sounds, and the sense of belonging. As history has shown us, numerous urban “renewal” efforts in the name of eliminating blight disregarded people’s visions for their homes, resulting in displacement of individuals and disintegration of communities. Today, the trend is to promote transit oriented development (TOD) in the name of addressing climate change. But if development is done inequitably, it represents the latest challenge to low-income communities of color.

Oakland Chinatown’s history is one of survival in the midst of continual acts of displacement. The first Chinese immigrants who formed various Chinatowns in Oakland during the 1850s had been driven from the fields of the Gold Rush by racist, hostile miners. Later, intense racism would cause some of these Chinatowns to move—as with the settlement at San Pablo Avenue and 19th Street—or be eliminated altogether—as when the Chinatown at Telegraph Avenue and 17th Street burned down. Eventually, the Chinese community was consolidated in the area around 8th and Webster Streets.

Roy Chan of the Oakland Asian Cultural Center has been documenting this history, particularly because as time continues to march forward, much knowledge has been lost to the current residents.  “The reason why we wanted to tell a complete story of the blocks that used to be there is because more recent immigrants do not have any idea of what happened,” says Chan.

“The Oakland Chinatown Oral History Project is a way to personalize and humanize the story—to show that these were real homes that were built over the decades and taken away,” he explains. “We want to equip the community to know its own history and to speak on its own behalf.”

A key turning point for the neighborhood came in the mid 1960s. In 1965, the Bay Area Rapid Transit (BART) agency, working with the city, redeveloped three blocks in Chinatown—demolishing existing buildings and relocating Madison Square Park to create the Lake Merritt BART station and BART headquarters. Destroyed in the process were 75 homes, an orphanage for girls, and the Chinese True Sunshine Episcopal Church.

“Leaving that church was more traumatic for my mother than leaving her house. In my lifetime, I only saw my mother crying twice. Once was when her biological mother died, the other time was when they took away the church property,” says Fran Toy, former resident of the area. “After the church was moved, we lost congregation members by the drove. And I remember one Sunday going to church, the priest and I were the only two people there.”(See sidebar on page 66 for a detailed account of Toy’s experience.)

More recently, tenants received eviction notices from the Pacific Renaissance Plaza in 2003. As Amber Chan of the Asian Pacific Environmental Network (APEN) recalls, “At the time, they evicted low-income elderly and families from 50 units. We knew we had to fight to stop the evictions.  I remember one tenant saying ‘I am not a dead rat.  You cannot throw me to the street. I will stay here and fight you.’”

Then in 2006, BART decided to demolish its headquarters and close down the Lake Merritt station plaza, leaving the neighborhood without a vital community space for tai-chi, chi gong, and lion dancing. The community collected over 1500 petition signatures and raised $35,000 to create a space at Madison Park, but the funding was not enough to cover other needed services, such as public restrooms and a covered pavilion. 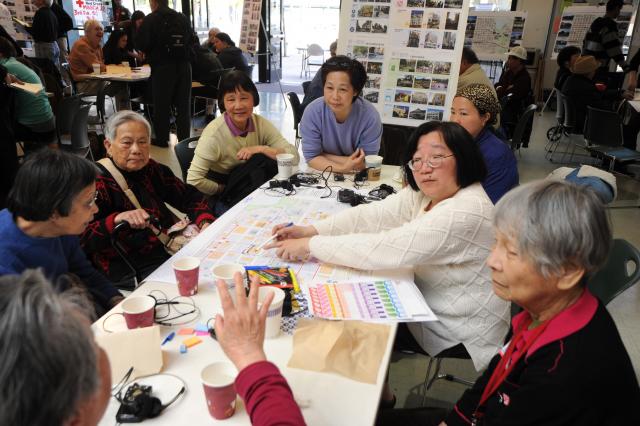 Transit Oriented Displacement: Circa 2012
Now, Chinatown is once again at the heart of another development process. The push to develop housing, jobs, and neighborhoods near transit is an opportunity to create green, walkable, transit-friendly communities that will reduce car usage and greenhouse gas emissions. However, development without equity can result in the displacement of core transit users, such as renters and low-income households, and an influx of higher income, car-owning residents who are less likely to use public transit, thereby defeating the goal of development near transit. A study by the Center for Community Innovation at UC Berkeley’s Institute of Urban and Regional Development has shown that the area around Chinatown and the Lake Merritt BART station is highly susceptible to gentrification. Fruitvale and West Oakland are examples of areas that have experienced rent increases, evictions, and loss of affordable housing as a result of such development.

Given the history of displacement, there is a lot of fear in Chinatown of being excluded from the decision-making during this round of redevelopment.
“When it comes down to the community, the citizens who live in Chinatown are usually last,” says Alan Yee, an Oakland-based attorney, in a recent KALW news report. “In redevelopment, they look to the developers and what they want and forget what the community needs.  Unfortunately, when BART came in, the community wasn’t organized, so they were able to take the land without any community input or compensation to the community.”[1] 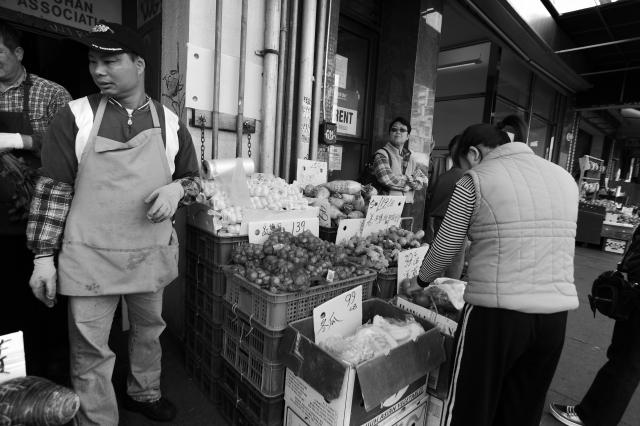 Organizations, such as APEN, Asian Health Services (AHS), and East Bay Asian Local Development Corporation (EBALDC) have worked to organize community members—conducting over 1000 surveys and engaging them in planning workshops—so they are able to articulate what they would like to see in the plans.

“Community engagement is definitely important because of the history of these processes in Chinatown,” states Julia Liou of AHS. “Traditionally, our communities haven’t been part of the planning process. Usually, it’s just a flyer that goes out. So, it’s important to advocate for the needs identified by the community.”

“We really want to see a neighborhood that is a place where people choose to live and have the ability to afford to live, regardless of their economic condition,” says Ener Chiu of EBALDC. “The plan should provide the kind of cultural, business, public, and educational amenities that would make people want to live here.”

Li Ya Chen, a member of APEN, says, “When I first arrived in the Bay Area, my monthly income was only about one thousand dollars, but the rental of a one-bedroom apartment was over $700. It was very difficult to survive. I heard about low-income housing, but I was at a loss because I didn’t know where and how to apply. The Lake Merritt BART project should be for people at all income levels. Affordable housing should include extremely low-income folks.” 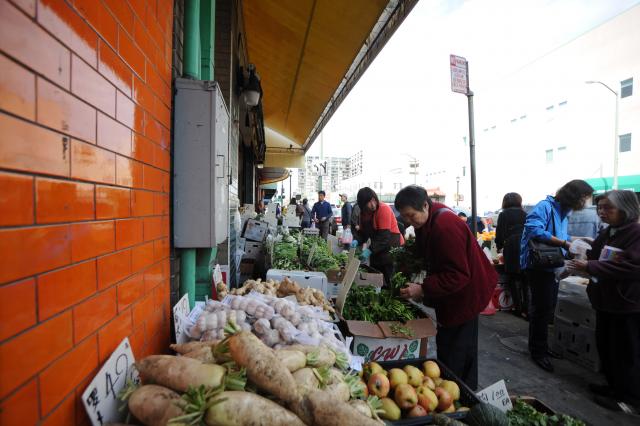 Shao Yang Zhang, another member of APEN, believes that public safety, employment, and housing issues are related to each other. “To solve the problem of public safety, we must solve the job and housing issues because they are the root causes of the problem,” she points out. “The more housing complexes, the more supporting facilities you will need to provide employment opportunities to the local community and help enhance the people’s standard of living. If everyone has a job and stable place to live, the crime issue will be improved. Oakland could become a model city for the nation.”

In addition to the issues of housing, jobs, and public safety, many community members also cite the need for greater pedestrian safety. “My apartment is located right next to a crossroad that often has a lot of car accidents. Two years ago, my neighbor, Mrs. Chan, was hit and killed by a car,” recalls Hai Bo Pan, another APEN member. “Not long after, another gentleman was hit by a car at the same location, and he was seriously injured.”

Chinatown, it is important to remember, is not just a community for Chinese. As Tô Châu, a Vietnamese patient at AHS points out, “Chinatown is important because it is an Asian place where I can get food that I can’t get in other areas. I do want it to be improved. Some housing is so old, it is a sad sight. In the next 20 years, I want to see this neighborhood improve, and I hope to have more parks.”

The planning process is now moving into the stage where a community stakeholder group—comprised of about 50 people representing the institutions and constituents of the area—will be working on shaping the plan over the next several months. “I am hopeful that we can fix the problems together,” says APEN member Hui Zhen Li. “If we can make this plan meaningful and the city does what it promises, the area will be beautiful.”