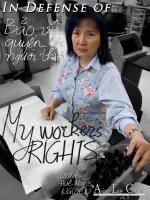 Oakland-based Alisha Tran remembers the first time she suffered strange symptoms while working as a manicurist. “One day I was working with my client, and I feel my face numb. I feel a numbness on my finger... I cannot close [my hand] and I cannot open it... I sweat too, [I] sweat a lot… And I was talking with client and I said, ‘call ambulance.’”

“And then he asked me, ‘What kind of job you working?’ And I said, ‘I am working for nail salon.’ And then he said, ‘I think you should quit your job.’”
The nail salon industry is booming nationwide. The number of salons in California has more than tripled in the past two decades, according to the California Healthy Nail Salon Collaborative, whose report also notes that an overwhelming majority of the manicurists are women of color—59 to 80 percent are Vietnamese—and of reproductive age.[1]

Every nail salon carries products loaded with chemical compounds with hard-to-pronounce names, including the commonly occurring “toxic trio”—dibutyl phthalate, toluene, and formaldehyde. Animal studies of dibutyl phthalate have shown reproductive and developmental effects.[2] Formaldehyde is classified as a known carcinogen.[3] And toluene has been shown to depress the nervous system.[4]

Unfortunately, not many studies have been done on workers exposed to the “toxic trio” every day. Which is why Dr. Thu Quach, an epidemiologist with the Cancer Prevention Institute of California (CPIC), decided to study the prevalence of breast cancer among nail salon workers in California.
When the CPIC matched the names on the California cancer registry with names of licensed manicurists in the state, they did not find any alarming trends. Dr. Quach believes that this is because the data was limited. The workforce, for the most part, is young and has not been in the industry for more than 10 years. And cancer takes a long time to develop.

Regardless of the findings, health advocates see cancer as just one of many health outcomes to be concerned about. Dr. Quach sees the cancer study as a first step in monitoring the workforce.

“While we’re waiting for the research evidence—which often takes so long when it comes to epidemiology and population health finds—we need to phase out these chemicals now rather than waiting for research to show the dead bodies,” she says. 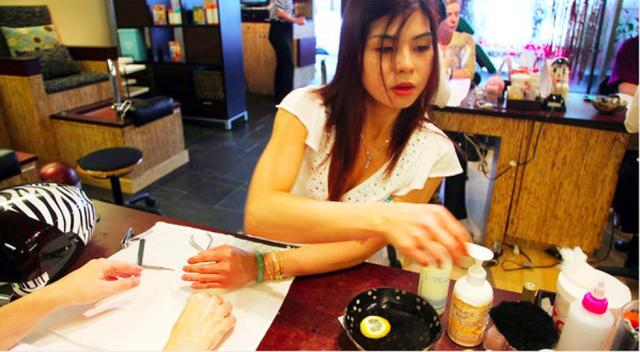 The Push for Cosmetic Regulation
The Food and Drug Administration currently regulates cosmetics, which includes nail products. But Jamie Silberberger, director of programs and policy at Women’s Voices for the Earth (WVE), believes that “regulation” may be an overstatement.

“The federal law that governs the cosmetics industry is two-and-a-half pages long and it hasn’t been updated in 70 years,” says Silberberger. “Because the law is so weak, companies can use ingredients that are known to cause cancer—or cause reproductive harm—and it’s perfectly legal to do that.”

According to Silbergerber, there is a cosmetics industry review panel, but to date only 11 percent of more than 12,000 cosmetic chemicals have been reviewed for safety. What’s more, she says, the law requiring disclosure of ingredients on cosmetic retail products does not apply to items used in the salons.

“Nail salon products are not required to be fully labeled,” Silberberger explains. “If you buy a bottle of nail polish at a retail store, you’ll see at the bottom a full list of ingredients. And that’s required by federal law. But with salon products, there’s a loophole and no requirement for them to be labeled. So nail salon workers don’t know what’s in them.”

However, groups like the National Healthy Nail Salon Alliance—of which WVE and the California Healthy Nail Salon Collaborative are a part—advocate for more worker protections, not just chemical policy reform. They want changes in the permissible exposure limits or “PELs” set by the Occupational Safety and Health Administration (OSHA).

“The [OSHA] standards were created in the 1960s for an industrial setting,” explains Silberberger. “The intention was to protect against acute exposures. But these permissible exposure limits don’t take into consideration the effects of a combination of multiple chemicals over the long term, or the chronic health effects of exposure, such as asthma, cancer, or reproductive harm.” Often times, nail salons are poorly ventilated, she adds, which increases the exposure to harmful chemicals.

Silberberger calls the European Union’s laws around toxic products “precautionary”—an approach that the United States does not subscribe to. But there is change on the horizon.

The Safe Cosmetics Act was introduced in 2010. If reintroduced and signed into law, it would ban the use of known carcinogens, genetic mutagens, and reproductive toxins, and require pre-market assessment for safety of ingredients. It also would close the loophole that allows products to go unlabelled to nail salons.

“It would be a tremendous victory if we were able to pass this law,” says Silberberger. But first, the Act needs to be reintroduced in Congress, which is not expected to happen soon.

The State of California passed a Safe Cosmetics Act in 2005, which provides for light cosmetic safety regulation, but groups are still waiting for more comprehensive national reform.

Advocates for Salon Workers Speak Up
In the lobby of the Asian Health Services (AHS) in Oakland, California, 61-year-old Lam Le is sitting in a fold-up chair. She is accompanied by her interpreter for the day, My Tong, an associate with the California Healthy Nail Salon Collaborative. After surviving the Vietnam War and living in refugee camps, Le came to the U.S. in the late ‘80s.

“She thought that being a manicurist was pretty okay for her,” says Tong, interpreting for Le. “She can make a living. But she knows that the chemicals probably won’t be too good for her health.”

Le, who worked in the industry for 12 years, has been diagnosed with a thyroid condition and has suffered from asthma and skin rashes. She had breast cancer too, and beat it twice. Le was never told directly by a doctor that her ailments were related to her work in the salons, but she says that she is ‘scared’ of the businesses.

“Just smelling those chemicals makes her want to run away!” laugh Tong and Le.
For all her hardships, Le is quick to smile and speak up. She is at the AHS not as a patient, but as an advocate. Le was trained in patient leadership at the AHS by the California Healthy Nail Salon Collaborative5 and she is waiting for other nail salon workers before going to a special EPA hearing on environmental justice.

“She wants to ask Congresswoman [Barbara] Lee and [EPA] Administrator Jackson to improve the conditions for the nail salon workers,” explains Tong.

At the Oakland Federal Building, Le and Tong prepared her statement for Barbara Lee as they waited for the EPA town hall meeting to begin. Le had to convert her two-page testimony into a single question on a small index card, which was read out to the representatives by Phaedra Ellis-Lamkins of Green for All.

Sitting beside Le was Connie Nguyen, a nail salon worker for 17 years who suffered from asthma. She wanted help with identifying formaldehyde-free disinfectants that might be better for her breathing.

The calls for environmental justice were many—too many for everyone’s voices to be heard. Among the voices that did not get heard that day by the EPA representatives was Le’s and she was clearly disappointed, although she managed to force a smile.

AHS Tries Education Through Patients
On a Wednesday morning at the AHS in Oakland, about 20 Vietnamese-speaking patients gather around a conference table. They are patient leaders being educated about a wide range of health care topics so that they can go out and discuss them with the rest of the community.
“Recently, we [have been] talking a lot about nail salons,” says Alisha Tran, an ex-manicurist and nail salon owner who now leads the Patient Leadership Council (PLC) at AHS. “Most of the time, I talk about toxics.”

Tran talks to AHS patients about the need for ventilation, wearing masks, taking a break, and using green products in the work place. She also talks about the “toxic trio” found in nail salon products and their strong link to negative health impacts and other harmful chemicals, in the hope that the information will eventually reach the Vietnamese-speaking workers in nail salons.
“I need their spirit to spread the news,” she says.

Le is also present at that PLC meeting, wearing a blazer suit, earrings, and a big smile. And although she speaks through interpreter My Tong, her voice and her words carry power.

“I want to talk about this issue so that other people won’t have the same problem,” she says. “Other people may be quiet, but not me. I want to speak out.”

Nail Salon Factsheet
1.     Market research conducted by Nails Magazine estimates that In 2010, there were approximately 376,165 nail salon technicians in the United States.
2.    A large proportion of the nail salon workers are Vietnamese. Sources estimate that in California 59-80 percent of the workforce is Vietnamese—in the United States as a whole, 40 percent.
3.    The mean yearly wage of manicurists and pedicurists was estimated at $22,150 for 2009. In the state of California, the wage projection was even less than that.
4.    At least 36 percent of nail technicians were salon owners, according to Nails Magazine’s 2010 survey. Nearly 28 percent rented booths at salons and kept all their service fees. Fewer than two percent were employees of salons and received salaries and tips. Salons usually have few employees and about 50 percent of those surveyed had just one technician and about 22 percent had two.
5.    It is estimated that more than a fifth of all nail salon employees work more than 40 hours a week.
6.    In a 2007 Nails Magazine survey of the nail salon industry, 36.2 percent of respondents had worked in the industry for 10 years or more and 30.5 percent had worked for five or fewer years.
7.    More than one fifth of the nail technicians in a 2010 survey did not have medical insurance. About 38 percent had insurance through a spouse. And less than three percent had medical insurance paid for by their employer at the salon.
8.    A majority of Vietnamese nail salon workers surveyed in a 2008 Northern California Cancer Center study were concerned about exposure to chemicals at their workplaces. A “sizable” proportion of these workers also reported experiencing acute health problems—with skin and eye irritation, breathing difficulties, and headaches—after working in salons.
Note: Owing to limited participation in the Nail Magazine survey, the general statistics may not adequately reflect the situation in Vietnamese salons.

Related Stories:
Jobs
Tweet
‹ Filipina Domestic Workers on the Move up Class, Race, and the Attacks on Public Employees ›