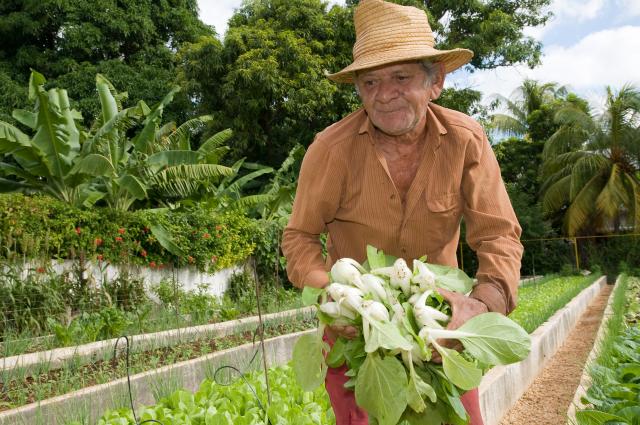 By Mickey Ellinger with photography by Scott Braley

What will it mean to our oil-steeped economy when we run out of cheap oil? Will it mean the ruined warlike world of Mad Max or the peaceful post-industrial tribalism of Ursula LeGuin? Is there a model for a modern urban post cheap oil society? How, for example, will schools and hospitals provide nutritious meals when there is not enough fuel to haul produce to urban markets. The answer is urban cooperative farming.
Utopian though it may sound, the idea is actually Cuban. Cubans are actively using urban gardening—an after-work hobby—to help them shed an oil-dependent plantation economy and create long-term sustainability.

Building a Post–Plantation Cuba
The small island nation of Cuba has been exploited in the world economy since Christopher Columbus stopped by in 1492, beginning a process of extermination for the native populations and sowing the seeds of a plantation economy based on slave labor. For most of the last 500 years, Cubans have grown sugar, coffee, and tobacco for foreign markets: first Spain, then the U.S. and the Soviet Union. 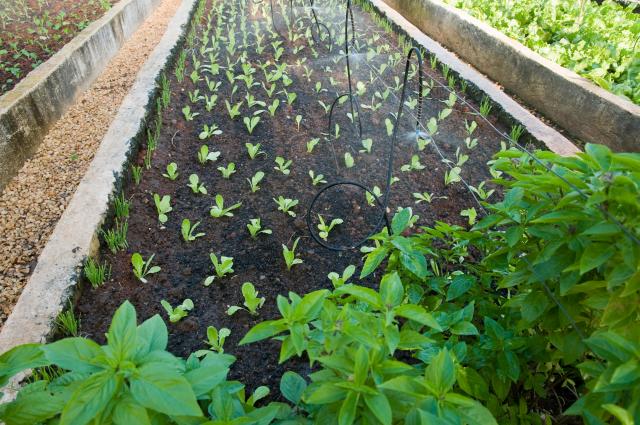 During the 1980s, Cuban ecologists started talking about sustainable development using environmentally sound techniques to become self-sufficient in food. Although few changes were actually made in that decade, some fundamental concepts of organic agriculture and integrated pest management were studied.

Cuban farming was based on Soviet-style megafarms and U.S. agribusiness. Massive quantities of Soviet petroleum products were used to operate tractors, make chemical fertilizers and pesticides, and fuel trucks to bring agricultural products from distant farms into the city. Cuba exported sugar and imported food. When the Soviet Union collapsed in 1991, the Cuban economy collapsed with it.  Gross domestic product fell by half and oil imports by 80 percent. Without subsidized Soviet oil and petroleum products, the cities faced a food and transportation crisis. Even though Cuba maintained basic food rationing so that no one would go without, calorie and protein intake fell below minimum levels as defined by the United Nations.

Scrambling to feed themselves and their families, some began planting food in vacant lots. Many early gardens failed for lack of knowledge, but the grow-your-own idea took hold. Through trial and error, ecologists and agronomists began establishing organoponicos, the distinctive raised bed organic gardens of Cuban urban agriculture today. Harvard ecologist Richard Levins, who worked with the Cubans in the 1980s, says “The rest of us [the ecologists] saw it as a process of converting ecologists-by-necessity into ecologists-by-conviction.” 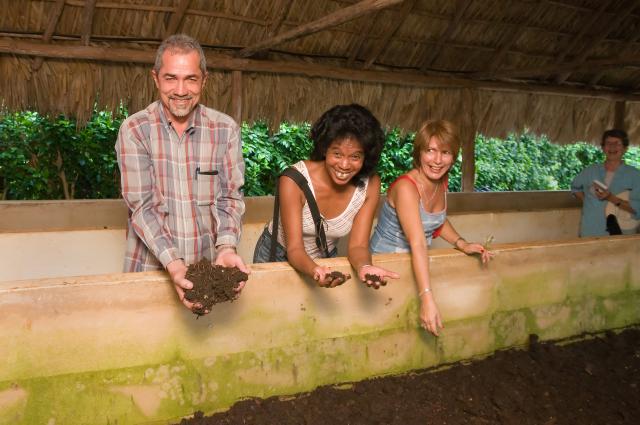 Organoponicos can be as small as the vacant lot used by a three-family coop in Pinar del Rio, or as large as the 26 acres used by the 150-member Vivero Alamar in the Havana suburbs. Countrywide, there are more than 7,000 organoponicos, and their number is growing. Havana, with 2.5 million people, has more than 200 gardens, plus thousands of backyards and rooftops where people grow leaf vegetables, tomatoes, herbs, and even wine grapes.

Historically, farming has meant hard labor but in Cuba it was primarily forced, underpaid labor on someone else’s land. The new Cuban farms, in contrast, are mostly cooperatives managed by their members who may work equally hard but make about three times the national average wage and are considered valuable contributors to Cuban society.

Entertaining Insects in Havana
“Del cantero a su mesa!” (From the garden bed to your table!) proclaims a sign at the 44th Street organoponico in Havana’s Playa municipio or burrough. The garden, whose concrete raised beds take up about half a city block, was started in 1992 in an old parking lot. All produce from the garden not contracted to go to institutional kitchens is sold on site at the punta de venta on the day it is picked. Eighty percent of all profits goes to the eight-member collective that tends the garden, 15 percent goes to the state, and five percent into a capital reserve. Collective members—consisting of three production workers, three salespersons, an agronomist who serves as collective director, and a biologist—earn about 1000 Cuban pesos each, which is about three times the average monthly wage. 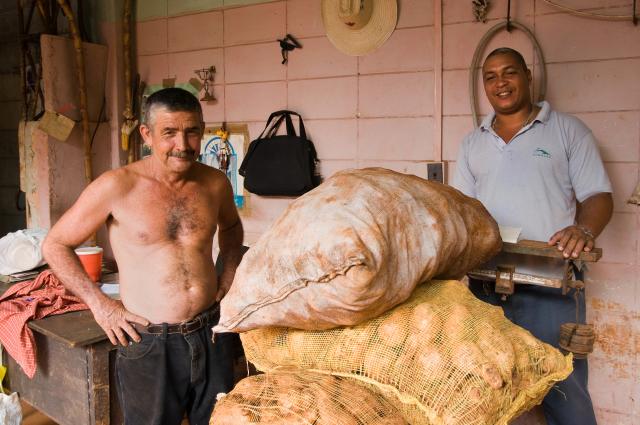 Every aspect of the 44th Street urban farm is designed to be integrated and sustainable. Collective members closely follow recommendations laid down in an agriculture manual jointly produced by the United Nations and Cuba. For instance, sorghum is grown all along the periphery of the garden as a trap for bugs who will munch on that instead of the leafy vegetables. “It keeps the insects entertained!” says agronomist Roberto Perez Sanchez. The collective also does companion planting—the practice of planting in bands of different colors to confuse the insects—with basil and marigold, or onions and garlic serving as insect repellents at the edges of the beds.

The soil is enriched with worm compost. The worms process vegetable leavings and manure from the oxen and mules that have almost completely replaced mechanized labor. Like most of Cuba, the organoponicos get water from a well on site. The water is magnetized to remove minerals that would build up in the beds, and its quality checked regularly by state inspectors who also ensure that the water table is not falling.

The collective makes a production plan each November for the primary crops of lettuce, bok choy, spinach, radish, green onion, garlic, chives, arugula, green bean, carrot, watercress, celery, and parsley. They also grow smaller quantities of broccoli and have an experimental bed of Argentine green bean that looks like a snap pea on steroids. Some medicinal plants, such as aloe vera, chamomile, marjoram, mint, and chicory are also raised.

In addition, the 44th Street garden is a CREE (Centro de Reproduccion de Entomopatogenos y Entomofagos), i.e. a production facility for a biological insect control called trychoderma used against nematodes, which attack the roots of plants like lettuce. They sell it to retail customers and to the state for distribution to other gardens. 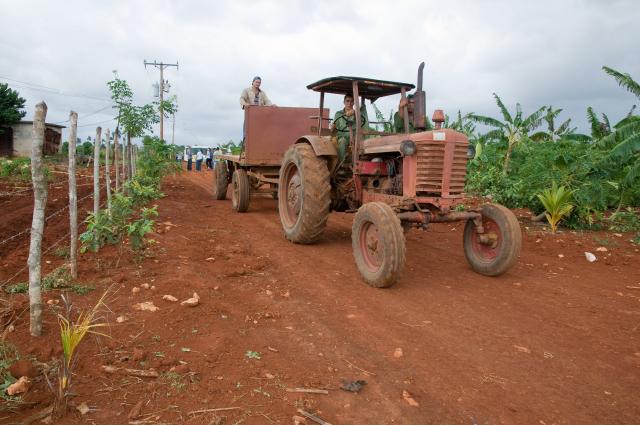 Farming Cuban Style: Science Plus Decentralization
In Cuba, farming has gone from being the labor of an underpaid migratory worker class to becoming a skilled craft that provides steady work, thanks to the new model of coop agriculture that emphasizes practices like inter-cropping (planting beans between banana trees, for example) to insure against weather disasters and  mono-crop diseases. The results have been outstanding with farms producing as many as five crops a year on well-amended soil. Cuban food production now meets international standards for food security and the acceptable minimum standard for calories and protein.

The Global Footprint Network has defined three fundamental measures of development: long life, access to education/literacy, and access to income. By these standards, Cuba is a developed country with a life expectancy of 77 years, a literacy rate of 97 percent, and a per capita income of about $10,000. What’s more, a 2007 report by the Global Footprint Network found Cuba to be the only country on the planet with both, a reasonable standard of living and a sustainable ecological footprint.

In contrast, the standard of living in the U.S. can only be sustained with the resources of five-and-a-half planets, and many third world nations with sustainable lifestyles have vast numbers of poor, illiterate, and sick peasants and slum dwellers.

The development of urban agriculture is part of a set of innovations in the Cuban economy to become more decentralized and more varied. Gone are the days when sugar exports were the biggest item in Cuba’s balance of payments. These days Cuba trades its doctors for Venezuelan oil, and imports from China and Vietnam, as well as Europe and Latin America. It was a founding member of ALBA, the Latin American common market.
So, what would happen if the U.S. ended its blockade and oil, fertilizers, and pesticides again became available? Probably nothing. The general opinion is that organic agriculture gives better food and farming coops are creating hundreds of thousands of good jobs. Who would want to go back to the old ways? 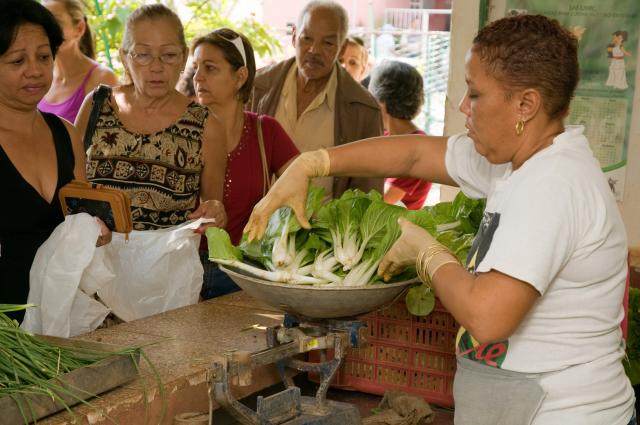 Como en Havana?
By the measures of a consumer society, Cuba is poor—housing is crowded and consumer goods are scarce and expensive. But to communities suffering from unemployment, poor health care, poor nutrition, and schools that track students into prisons or the military, the Cuban lifestyle looks very good. Everyone in Cuba has access to high quality free education and medical care, cheap transportation, and a basic food ration supplemented by organic produce grown wherever people live.

Urban agriculture in the U.S.—although moving into mainstream awareness as more and more people renounce the unsustainable “U.S. way of life”—is still largely the province of volunteers and nonprofit organizations who create community, school, and prison gardens. But an article in Fortune magazine earlier this year entitled, “Can Farming Save Detroit?” featured a money manager who smells profit in growing food on abandoned land in Detroit.

Whether U.S. urban agriculture becomes yet another source of profit for venture capitalists or a resource for community self-determination remains a key political question for the coming years. If we believe the slogan at last summer’s Social Forum in Detroit—“Another world is possible; another U.S. is necessary”—we should take our lessons in sustainability from Cuba.

Mickey Ellinger and Scott Braley are a writer/photographer team from Oakland who often work for social justice and nonprofit organizations. Ellinger is a journalist and fiction writer (www.mickeyellinger.com). Braley is a freelance photographer and a member of the Bay Area Press Photographers Association and the American Society of Media Photographers (www.scottbraley.com).

Related Stories:
Environmental Health
Climate Change
Tweet
‹ Transforming the Land-- One Garden at a Time up Racial and Gender Justice ›

END_OF_DOCUMENT_TOKEN_TO_BE_REPLACED
The Earth Is the Only One Telling the Truth