Transforming the Land-- One Garden at a Time 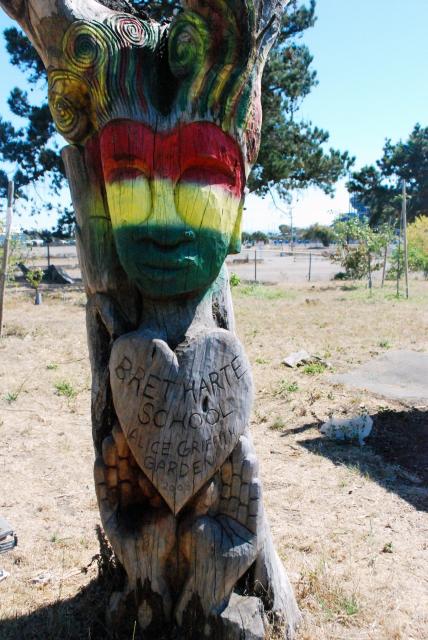 Raheem Payton used to think nothing of littering streets until he discovered his community garden. Now he is angry that he and his friends ever did such a thing. “I’m an advocate for putting your trash in the right place now,” he says, “and I try to keep my friends on the straight path, too.” Payton discovered his calling earlier than other youths through a program called Literacy for Environmental Justice (LEJ) in the Bayview district of San Francisco. Founded in 1998 by a coalition of youth, educators, and community leaders, LEJ addresses the ecological and health concerns of Bayview-Hunters Point and surrounding communities of southeast San Francisco.

The project that Payton participates in operates a native plants nursery at a former dumpsite near Candlestick Park. The garden is the primary supplier of plant stock to two major restoration projects in San Francisco—Candlestick Point State Recreation Area and Heron’s Head Park.
Payton works three hours a day in the garden transplanting starter plants into larger pots to be taken to one of the restorations sites. Already, the 18-year-old is hooked on gardening.

“I want to major in landscape architecture [and] design gardens to encourage cities to be healthier and better looking,” he says. Community organizer for Green Action, Marie Harrison says, “These children are gaining knowledge that is quite valuable. If there ever was a disaster these children would know exactly how to sustain themselves.” 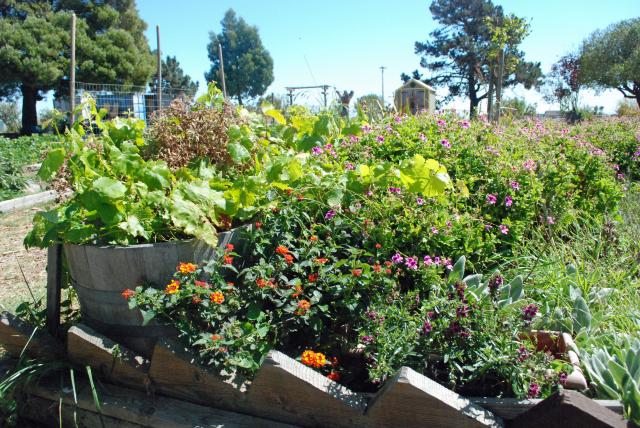 Food Security with a Local Twist
The community gardening initiative has also been a real boon to other South San Francisco neighborhoods like Visitacion Valley that have no grocery store, hence no access to fresh produce. Rather than wait for city officials to do something about it, this community of 20,000 took matters in their own hands and created one of the largest urban farming plots in the city.

“We have hundreds of thousands of [plots] in this city,” says Patrick Rump, Bay Youth Program Manager for LEJ. “It’s really important that we hold on to our native plants and transform the land into something we can be proud of.”

Rump specializes in environmental education in a program that is part of an initiative to save California’s state parks. Over the last six years, Rump and his youth group have helped create a plant nursery that is home to over 50 species of native plants, including coyote grass and purple needle grass. Contrary to popular belief, plants and grasslands give out more oxygen than trees and help the environment. “Climate change is threatening food security,” says Rump. “We are part of a group of people who want to change this situation.” So, the program grows vegetables and fruits, which are given to local residents on a first-come, first-served basis.

Eating locally produced food reduces fuel consumption, carbon dioxide emissions, and a variety of other negative environmental consequences associated with the transportation of food,” says David Seaborg, evolutionary biologist and founder of the World Rainforest Fund. In the U.S., a meal travels about 13,000 miles on average before reaching your plate, according to the Iowa State University Center for Sustainable Agriculture. 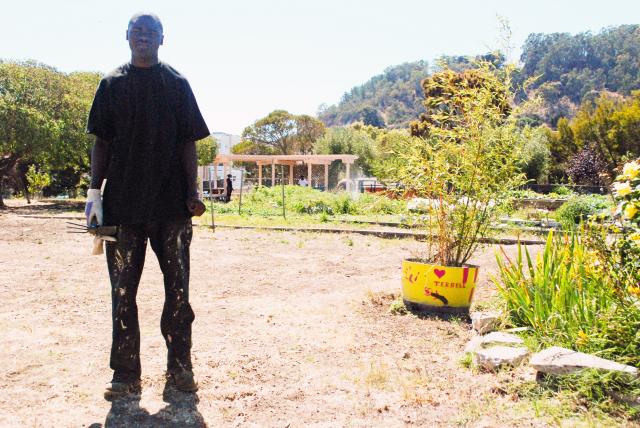 Amidst the Pollution, the Best Tasting Fruit
Bayview-Hunters Point has a number of environmental concerns. It is home to over 80 percent of San Francisco’s waste, it is a superfund site, and it has two major freeways running through, which exposes residents to serious air pollution. Now it has its own community garden.
“The kids really benefit from these gardens first hand because they can take the vegetables home to their parents and cook them,” says Jackie Williams, head of the community garden at the Alice Griffith Public Housing project in Bayview.

Eighteen-year-old Victoria Bryant who works in the garden is convinced that the fruits they grow there are a lot tastier than the ones she gets at the grocery store. The children are also paid to help in tending to the garden where they grow cabbage, collard greens, squash, cucumbers and strawberries among other things. Williams helps the children understand all about harvesting and replanting with seeds from the harvest, so the seeds don’t have to be purchased each time. “The best thing about the garden is the people that I work with,” says Bryant. “It’s somewhere I can go to relax and also get educated and be a leader.”


A 2009 report on community gardens by the Local Government Commission in California said that gardening is a recommended form of moderate physical activity. Community gardens can encourage more active lifestyles by providing children and adults the opportunity to do physical work outdoors.

“To see something grow is extremely important in an urban community like ours,” says Sophie Maxwell of the San Francisco Board of Supervisors. “It’s a wonderful way to connect people with the earth.”

The absence of grocery stores in the southeast sector of San Francisco forces people there to travel to other parts of the city to buy groceries, which results in less money being circulated within their own community. Furthermore, the convenience stores in low-income areas sell fresh food at higher prices than chain stores like Safeway or Albertsons. A single banana—selling at 67 cents per pound elsewhere—may cost 75 cents at a local liquor store.

“I think the community garden initiatives open a door to help the Bayview community’s food access issues,” says Pandora Thomas of Grind for the Green, a hip-hop music project by the Global Exchange. “Gardening was a way of life for our ancestors and this is a great way to connect with our history as well.”

Crystal Carter is an independent journalist based in the Bay Area. She is currently working on a documentary film about the politics that surround a superfund site's redevelopment in the Bayview-Hunter's Point district. Find more of her work at www.popscampaign.blogspot.com.

END_OF_DOCUMENT_TOKEN_TO_BE_REPLACED
The Earth Is the Only One Telling the Truth