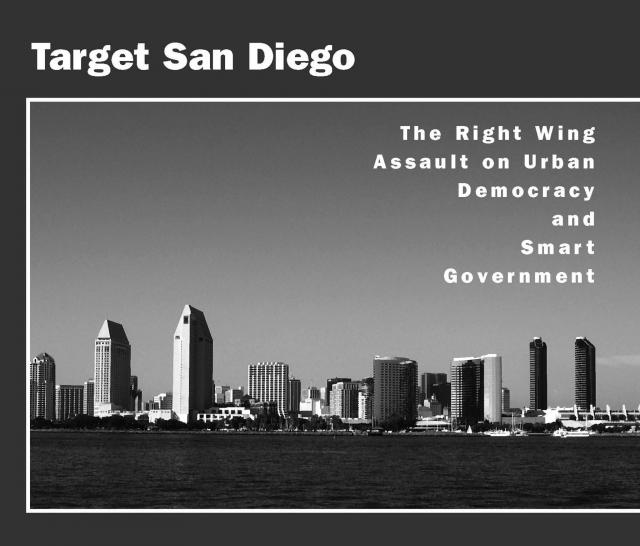 San Diego has become ground zero for the newly energized right wing attack on progressive policies. Right wing politicians and far right industry associations mounted several anti-union ballot measures this year and have pledged to continue the fight in the 2012 elections. Their goal is to make San Diego the first city in the country to repeal a Living Wage Ordinance and outlaw Project Labor Agreements (PLA), as well as effective local hire programs.

State ballot initiatives have always been part of the right’s political strategy. Each year progressives battle anti-tax initiatives (the so-called TABOR or Taxpayers Bill of Rights), environmental rollbacks, anti-labor and anti-immigrant policies, and other conservative wedge issues. But the attack on cities is a new and troubling feature of the right wing backlash and San Diego is the first phase of a conservative action to roll back and repeal pro-labor and progressive gains in California cities.

The Fight to Reclaim San Diego
Once the home of the John Birch Society, San Diego has long been known as a conservative city. In his book, While America Aged, Roger Lowenstein says: “[San Diego] was not historically a union town like New York. San Diego was Republican to the core—home terrain to both Richard Nixon and Ronald Reagan. (Reagan, who made a point of ending each of his campaigns in San Diego, called it his ‘lucky city’).”
But in the last two decades labor, community, and environmental coalitions have made important changes to the political landscape in San Diego with significant new progressive policies, many of them first of their kind in the nation, such as: (1) An inclusionary housing law for affordable housing with aggressive in lieu fees; (2) A ban on the use of the toxic pesticide methyl bromide in low-income communities; (3) A living wage ordinance and a Community Benefits Agreement for the largest private development downtown; (4) Strict design guidelines on big-box stores, plus community and economic benefits assessments on community plan amendments; (5) An economic prosperity element within the city’s General Plan, which ties land-use decisions to self-sufficiency jobs; (6) A stringent ordinance applicable to all city contracts that sets up a legislative hearing process for addressing irresponsible contractors; (7) An expansion of the living wage law to cover low-wage construction maintenance.
In response, right-wing think tanks, anti-union contractors, industry associations, and political operatives have launched a series of local ballot initiatives that aim to roll back progressive gains and weaken the labor movement, creating new strategies for conservative and anti-union organizations to use in cities across the country.

A New Kind of Assault on Progressive Policy
Perhaps the most dangerous aspect of the new right wing agenda is that it seeks to make it harder to establish or reinstate progressive policies in the future by amending city charters. Examples include:

Charters adopted by Vista and Oceanside—two large cities in San Diego county—enable them to contract for public works without paying prevailing wages, or having union agreements. (On the ballot this November is a similar charter amendment for San Diego county.)
Expensive ballot measures rather than grassroots power that wins votes on the city council are the only means to undo the damage done by the charter amendments. “If they win here, they will have momentum going into other fights in California,” says Mark Ayers, president of the national Building and Construction Trades of the AFL-CIO. “You can rest assured that we will see the strategy replicated in short order in other states.”

Right Wing Takes Fight to Cities
Right wing strategists, such as Grover Norquist (Americans for Tax Reform) and Steven Malanga (Manhattan Institute), who have studied the growth of the progressive infrastructure, have been arguing for cities to be the next battleground for “permanent conservative political control” of America. Norquist and Malanga want to adopt a political strategy for attacking and weakening metropolitan-level constituencies that are the “key pillars” of the Democratic Party (unions, trial attorneys, ‘federally-funded’ social service providers, and academics) and form the core of “pro-government coalitions.”

According to Malanga, “The national living wage movement decided that they had little chance to achieve policy victories in Washington (under a Republican Congress) and so should turn their attention to cities and states where the political climate was more favorable.” Progressives, he claims, “...rightly figured out that they could still achieve legislative victories that would bring tens of millions of Americans under laws that could never get passed in Washington.”

A progressive municipal agenda, which encompasses living wage laws, responsible contracting laws, local hire policies, local environmental standards, inclusionary housing policies, and big-box restrictions is clearly a serious threat to the right wing’s efforts to weaken government.
Now industry associations, such as the Chamber of Commerce, the National Federation of Independent Business, the Associated General Contractors (AGC), and Associated Builders and Contractors (ABC), have allied themselves with the fight to roll back progress at the municipal level. These organizations are also at the front-end of opposition to healthcare, environmental, workplace safety, and financial reforms at the federal level. And while Washington dithers, they have  energized their local and state chapters to focus at the municipal level.
San Diego Is Right Wing’s Ground Zero
Over the past decade, San Diego has gradually turned “blue,” causing great consternation in right wing circles, which have made it their favorite target. When Carl DeMaio came to San Diego in 2003, his think tank—the Performance Institute—was already closely connected to the national and state conservative infrastructure. He collaborated statewide with the Reason Public Policy Institute to launch a “Citizen’s Budget” for California, laying out an anti tax and antigovernment agenda that propelled Arnold Schwarzenegger towards the right. The plan outlined several constitutional reforms that would be approved by the voter under a referendum, including a Taxpayer Bill of Rights revenue limit, a modified version of the Gann Spending Limit, and an automatic balanced budget adjustment trigger when revenues fall short of expectations.

DeMaio is now on the San Diego City Council and with his eyes on the Mayor’s seat has become the face of the San Diego Tea Party, stirring up populist anti tax sentiments. He is hooked up with the well-heeled contractors’ associations (ABC and AGC) to lead the assault on labor and progressive gains. Both associations were involved with Proposition 23, the attempt to repeal California’s global warming law.
A ballot measure that DeMaio and his supporters failed to get on this November’s ballot for lack of valid signatures has been described as “the most far-reaching effort ever to ban living wage ordinances or anything similar to them in a permanent way,” by Joel Foster of the progressive Ballot Initiative Strategy Center. The ballot measure that DeMaio and supporters have vowed to revive in 2012 aims to:

Their agenda is simply to “…create minimum wage jobs with no benefits so that we can line the pockets of Mr. DeMaio’s friends in big business,” says City Councilmember Marti Emerald. “This is about maximizing profits to big contractors who are lining up at the government trough right now.”

Progressives Fight Measure for Measure
San Diego’s progressive infrastructure is gearing up to defeat the next round of initiatives in 2012 and prevent the model from spreading. “We’ve got to have bigger coalitions, larger-scale one-on-one organizing in our neighborhoods, churches, and workplaces, and a smart communications strategy,” says Tom Lemmon, business manager of the Building and Construction Trades Council of San Diego-Imperial counties.
According to San Diego’s progressive leaders, there are three fundamental tasks they have to tackle in the next two years:
1.    Expose the right-wing agenda as one that will harm the economy, close off opportunity for low income and middle class San Diegan’s, and allow neighborhoods and infrastructure to deteriorate.
2.    Advance policy campaigns that can win with a progressive agenda that is pro jobs, neighborhoods, and the environment.
3.    Create a movement with the capacity to engage tens of thousands of people and win citywide elections.
“Our success in the future will depend entirely on what we do between now and the next election,” says Lorena Gonzalez, secretary-treasurer of the San Diego-Imperial Counties Labor Council, AFL-CIO.

Donald Cohen is the co-founder and president of the Center on Policy Initiatives. He has over 25 years of experience as an organizer and trainer in strategy, policy, and organization. Murtaza H. Baxamusa has a Ph.D. in Planning from the University of Southern California and a Planning Certification from the American Planning Association. He is a member of the Urban Land Institute and serves on the board of directors of the San Diego City-County Reinvestment Taskforce.