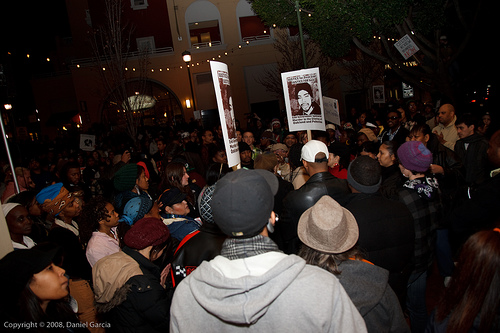 OAKLAND — As family and friends of Oscar Grant III pleaded for peace Thursday afternoon, broken glass still was being cleaned up from the previous night's near-riot in downtown, burned cars were towed away, and some business owners — fearing a repeat of the violence — made plans for nightfall, closing early and sending employees home.

"I am begging the citizens to not use violent tactics anymore," said Grant's mother, an emotional Wanda Johnson, who appeared with about 30 of Grant's relatives and friends at a news conference called by attorney John Burris at his East Oakland office.


Burris is representing Grant's mother and 4-year-old daughter in a $25 million lawsuit filed against BART in the officer-involved shooting of an unarmed Grant, 22, in the early hours of New Year's Day after a scuffle at the Fruitvale BART station. BART police Officer Johannes Mehserle, who fired the fatal shot, has resigned from the force.

"I know it's a very frustrating time," Johnson said, referring to the protracted police investigation into the shooting. "But Oscar would not want to see the violence and the fires. We believe this situation is going to come to a close and justice will be served. I'm asking you please, please stop it and let justice prevail. Please stop it."

Mayor Ron Dellums and other city leaders urged the public to remain peaceful and said the Oakland Police Department will investigate the shooting.
Advertisement
The department's role will to be to aide the Alameda County District Attorney's office, which previously had been working exclusively with BART police, in its investigation.

"We will review what has been done and we will develop our own witnesses as well," said Oakland police Chief Wayne Tucker. "That's what's intended now."

Alameda County District Attorney Tom Orloff said he expected a case to be "totally prepared" in about two weeks.

"I know people are unhappy with that," he said. "I know there's a lot of emotion. I have to sit back and look at this as objectively as I can with all the facts that are available and make the decision — not only whether or not he should be charged, but what offense he should he charged with ... and it's not as simple as most people think."

The rioting, which police estimate caused at least $150,000 in damage, broke out late Wednesday after an originally peaceful protest about Grant's killing moved from the Fruitvale BART station to the downtown area. Splinter groups — many not related to the original protest — fanned out, breaking store windows, setting fire to at least five cars, including an Oakland police patrol car, and smashing windshields of parked cars, leaving them caved in like crushed eggshells.

After using tear gas and corralling rioters on Broadway near 22nd Street about 11 p.m., Oakland police made about 120 arrests for rioting, assault on a police officer, looting, arson, vandalism and other offenses. Some of those detained were found to have drugs and guns, which added to the charges, police said. A 28-year-old Oakland man was arrested for rioting and carrying two semi-automatic guns in his pants pockets.

Late Thursday, police were still processing arrest reports. At least 37 of those arrested were found to be from Oakland. Five were from Berkeley, and another five were from San Francisco. Others came from cities all over the map: Fremont, Kensington, Pinole, Hayward, San Leandro, Fairfax, Santa Cruz and even as far away as Santa Clarita in Southern California. One man told police he was from Indianapolis, officials said.

"It was a precautionary step, given what happened Wednesday night," he said. "We take the safety of our employees very seriously."

Online warnings flew back and forth on blog sites between people who work or live downtown, cautioning one another to stay inside or lock their doors.

Gregory Hunter, Oakland's director of redevelopment and economic development, said that more than 300 business were hit by the rioting. Oakland officials are urging those businesses to work with their insurance companies, Hunter said, but the city will also offer "financial assistance so the burden they are having to face now for repairing windows and even some merchandise that was damaged ... is not (being) faced alone."

During the day, as a standing-room-only crowd spoke out about the shooting at a BART board meeting a few blocks away, more than two dozen downtown merchants — mostly small-business owners already hit hard by the economy — spent hours sweeping glass off sidewalks and store floors, pounding plywood over smashed-out windows, taping large cracks in plate glass doors with clear packing tape, calling glaziers and insurance companies, and shaking their heads in disbelief that people would destroy the property of innocent residents and business owners, all in the name of justice.

"People already don't want to move to Oakland or bring businesses here. And here we are in 2009, starting off with change with a new president, and then we have people acting like this," said a tearful Rev. ElTyna McCree who owns Underground Treasures on 17th Street near Franklin.

"This is really hard, because I love Oakland so much, and I have been a business owner in downtown for 30 years," she said. "I've never seen anything like this."

McCree's store was untouched, but neighboring businesses were not so lucky. Much of the destruction was concentrated on 17th between Franklin and Harrison streets, where nearly every other business had been hit. Random stores also were attacked along Franklin, on 14th Street and on Telegraph Avenue. Even the recently restored Fox Theater had windows broken and damage to some of the carefully restored historic woodwork and terra cotta.

"Stuff like this happens all the time in San Francisco with all the protests there," he said. "In Oakland, with our growing urban (center), we will have to learn to live with it. Broken glass can be replaced, the damage to the building can be repaired, and it's good we still have crews working here so they can take care of it."

None of his other buildings, including the Rotunda, were damaged, although storefront windows at the Uptown nightclub and the Fox construction office next door were smashed. Windows were broken at Flora restaurant, which was filled with customers.

At Creative African Braids on 14th Street near Webster, store owner Leemu Tokpa feared for her life and that of her 8-month-old baby.

"I was in here, working on a client," she said Thursday morning through the broken-out windows of her store's front door. "My client had just walked out the door, and I saw a group of black guys across the street. They came running over and started throwing bottles at my windows. They were cussing, using the F-word, trying to force the door open.

"I couldn't understand it," she said. "It had nothing to do with what was going on. Nobody feels happy about the guy getting killed at BART, but if they come back to attack me as a black sister, I feel very disappointed, since I'm struggling, too. I had to run in the back to hide and protect my baby."

Tokpa's brother spent the night in the store for fear of more vandalism, she said.

Most felt sure the damage was not done by protesters but by splinter groups who just wanted to cause trouble. Elisher Muhammad was unlocking her broken glass door Thursday at Change Hair Studio. She had just moved to 17th Street from Telegraph about a month ago.

"We're the people, too. We're Oscar," she said. "I even went to a protest to speak on his behalf at the courthouse a few days ago. And here I am with this.

"I don't think it was the protesters," she said. "Even with Oscar's family, his parents, his mom — they're for peace. It's just people who have their own issues and own rage, and they look for an opportunity to disperse that."

"What do you get out of destroying someone else's property? You're still angry at the end of it. So what good did it do?" asked Paulina Blunt, a regular patron on 17th Street. She hugged Mimi Le of Mimi's Fashions and alterations, who has been in business there for 10 years and was outside sweeping glass.

"I had a window broken last year," Le said. "This time is horrible. Last time, it cost me $1,200 for that one window. Now it's two windows. I had considered getting a gate with security bars. That was so expensive. It was $5,000. But now I think I should have."