In 2014, there was a rare occurrence in California: a new revenue stream of hundreds of millions of dollars—$872 million, to be exact, with more anticipated in future years — being funneled to state agencies through the newly implemented cap-and-trade program to curb greenhouse gas emissions. 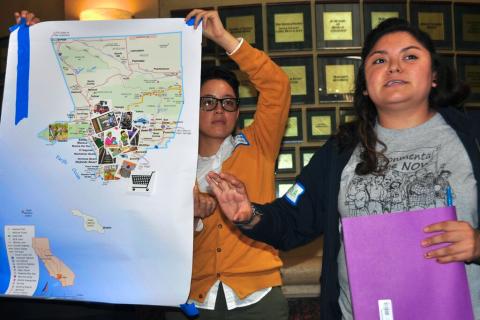 On October 31, 2014, the California Environmental Protection Agency announced that, as expected, it will use the statewide cumulative impact screening tool, CalEnviroScreen2.0, to define “disadvantaged communities” for the purposes of distributing climate change funding. The top 25 percent of communities identified by this tool will be considered “disadvantaged” for the purposes of the set-aside within the Greenhouse Gas Reduction Fund.  Suddenly, how “disadvantaged community” is defined took on a lot more importance to a lot more people than it ever has in the past.

CalEnviroScreen2.0 assesses what areas in California are most heavily impacted by 19 indicators of pollution burden, socioeconomic vulnerabilities, and public health risk factors. The tool ranks the roughly 8,000 census tracts throughout the state according to how many of these indicators are present and at what levels, and compiles it all into an online, interactive map. California Environmental Justice Alliance (CEJA) has been working on the development of CalEnviroScreen for several years now, but for many groups it has been a sharp learning curve to understand how it works and why we need it.

Defining “Disadvantaged”
What we saw over the course of the last year—both in spring negotiations over the budget and then again during the summer when the state rolled out a public process to develop guidelines for distributing the climate revenues—has been a statewide fight over how to best define, essentially, environmental justice communities.
The conversation has been messy, but important.

We saw regions pitted against regions, each area trying to get the “most” money possible by ensuring the definition of disadvantaged communities contained as many census tracts in their area as possible. In the Central Valley and Los Angeles, there are many census tracts that show up on CalEnviroScreen2.0’s top 25 percent. In the Bay Area, there are a lot less, so local agencies and legislators from the Bay Area were pushing to throw out use of CalEnviroScreen and undermine the science behind it.

Meanwhile, Central Valley legislators in particular got incensed at the perceived “grab” of their potential resources, prompting such memorable quotes as: “The State made a promise to invest in the long-term health of our most disadvantaged communities, but at the last minute, a cash grab from the wealthiest areas of the state is letting politics trump that promise,” from Assemblymember Adam Gray.

“While coastal communities worry about freeing whales, we are worried about underweight births and childhood asthma,” declared Assemblymember Kristin Olsen, both reported in a June 2014 Turlock Journal article.

It is one thing for our legislators and local agencies to fight one another, but it takes a turn for the worse when community groups get pulled into the mix. As many groups became concerned that the communities where they work would not be eligible for funding, and local agencies, such as the Bay Area Air Quality Management District tried to organize groups to oppose CalEnviroScreen2.0, it started to look like a community vs community fight for funding, which never helps our movement. 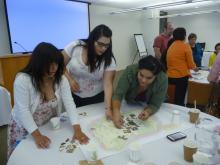 25 Percent
The irony is that a full three-quarters of the climate revenues are available to any project that meets the guidelines in any part of the state. The funding process is competitive. Even if you live in a community that qualifies for the 25 percent set-aside, you still must compete with other applications across the state. There is no guaranteed  funding.The big picture: a statewide perspective to ensure environmental justice communities are accurately identified.

For CEJA, the bottom line has always been: Are the communities that we know to be “environmental justice” communities—criss-crossed by freeways, covered in a patchwork of factories, refineries and warehouses, saddled with high poverty and chronic unemployment—are these areas identified by CalEnviroScreen2.0? The question should NOT be: will my region get as much money as possible through this definition?
And the answer to CEJA’s question, unfortunately, is not 100 percent “Yes.” There are places that have long, rich histories of documenting and organizing against environmental injustices that are left out, such as Bayview-Hunters Point in San Francisco and Mecca in the Coachella Valley.

But as we have made the case many times over, CalEnviroScreen is an important step in the right direction. We need to identify areas that are most impacted and target these areas for statewide resources, investments and pollution reduction efforts. CalEnviroScreen gives decision-makers a clear, credible scientific methodology to do so.

In our five years of working CalEnviroScreen, we have also seen a commitment from CalEPA to continue improving the tool. Just recently, they have been working to address the complicated issues of gathering accurate data on pollution along the border. We will continue our work to ensure all environmental justice communities in California are identified by future versions of CalEnviroScreen.

Debate Reflects Progress
It has been exciting to see many more people and groups engaged in what CEJA considers one of the most important statewide conversations on environmental justice issues: How do we define overburdened areas accurately? More broadly, the 2014 CalEnviroScreen fight highlights a major shift in statewide policy around environmental justice issues. More and more, state policies are creating explicit commitments to the state’s most vulnerable areas, using the term “disadvantaged communities.” To the best of our knowledge, this term first showed up in state statute back in 2009 in an effort to target regional water planning money to communities most in need (SB626, Eng).

While we may not love the term (or even worse, its acronym: “DAC”) because it is, in essence, a sanitized reference to the low-income communities and communities of color where CEJA, our members, and our allies have been working for years, the growing prevalence of the idea in policy signals positive movement towards environmental justice on a statewide level.

Here are a few examples of where the concept is being considered to help ensure EJ communities are included in statewide policy:

We are optimistic that the overall trend of including our communities—whether you call them disadvantaged communities, overburdened communities, or environmental justice communities—in state funding decisions and other policies will ultimately lead to the biggest win of all: improved health and environmental conditions in communities most highly impacted by pollution and climate change across the state.